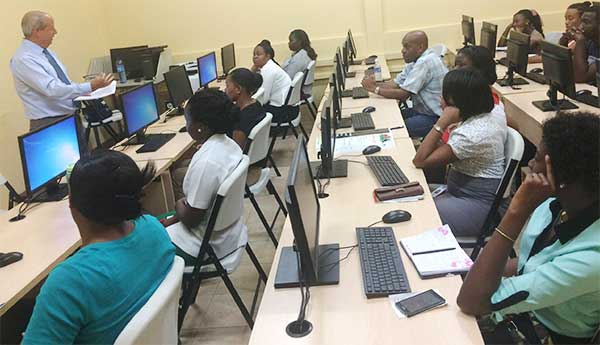 CHANCES are for the last couple of months, you may have heard or seen several public service announcements on radio and television and also posted in social media in the ECTEL Member States of Dominica, Grenada, St. Kitts & Nevis, Saint Lucia and St. Vincent and the Grenadines.

These Public Service Announcements were launched on World Consumer Rights Day, March 15 and sought to raise the awareness of consumers to several issues related to their use of broadband services in these states and the role of ECTEL and the NTRCs in this regard. The Public Service Announcements were produced by ECTEL through Grant Funding provided by the World Bank under the Caribbean Regional Communications Infrastructure Programme (CARCIP) and addressed the following topics:

Also with the support of CARCIP, ECTEL in collaboration with the NTRCs in their efforts to ensure fair returns to the key stakeholders in the sector, namely consumers and providers, embarked on the following initiatives:

2. A study to develop an appropriate model to measure the impact of broadband on economic growth in the ECTEL Member States and to utilize the model to measure the impact over the last five years. When the developed model was applied to the available data, it was found that “an increase in the broadband penetration rate of 1% would lead to an increase in real economic growth of 0.076% (other variables held constant).” This finding was deemed consistent with other empirical studies conducted in other parts of the world.

3. In collaboration with several partners, namely Great Village International Consultants, A4Ai and Consumers International hosted a Consumer Protection and Education Workshop in February 2016 to address principles of consumer protection as it relates to broadband, highlight and receive feedback on the draft Consumer Protection Regulations and develop specific actions to move the process forward. This workshop was hosted at the OECS Conference Room and extended online to key stakeholders in each ECTEL Member State. The stakeholders included Regulators, Consumer advocates, Civil Society Organizations and Government to include Departments responsible for Legal Affairs, ICT and Consumer Affairs. The following were some of the key actions proposed and adopted by the participants:

a. Consumer Groups to meet to consider the regulations – namely the Consumer Protection and Retail pricing regulations and provide feedback.
b. In support of (1) above, ECTEL/Consultants to summarize all draft regulations and circulate to consumer and civil society groups to better understand the provisions and provide feedback
c. Provide an enhanced mechanism for proper consultation and inclusion of consumers in any future update of the legal and regulatory environment.
d. Provide continuous capacity-building and training of consumers or their representatives, businesses and journalists on the legal and regulatory framework.
e. Participants were required to provide feedback on the People’s Charter or Digital Bill of Rights on the use of the Internet.

These initiatives are ECTEL’s direct and indirect responses to the need of its Member States to harness the opportunities provided by modern ICTs and their application in all facets of the national and global economies and to augment its mandate and mission as it relates to consumer empowerment. They are also congruent with the global policy push by key global institutions for affordable, safe and secure access to broadband for multiple services.

The World Bank Development Report 2016 notes that in spite of the explosion of ICTS, “only 31% of the population in developing countries has access to the internet, while only 15% of the world population can afford access to broadband internet. This is in comparison to the ECTEL Member States where access to fixed internet at home ranged from 61% in St. Kitts & Nevis to 33% in Saint Lucia. The push is to have every citizen on the planet connected to modern ICTs and the Internet. At the national level however, it is important that citizens are not left behind as a result of the digital divide, but that they have the ability to access the internet for services.

In spite of the efforts to get everyone connected, not everyone will be connected and that should be their right so to do. Mechanisms must be or put in place to provide indirect access to digital services. While there are many positives to access and being connected, there are also negatives. Increasingly, it has become important to protect the population from the negative effects of being a digital citizen. These include high cost access to the internet and digital services; unwanted content, cybercrime, intrusion into one’s privacy and a lack of good quality service. For example in relation to Cybercrime, McAfee notes that “as more business activities move online and as more consumers around the world connect to the Internet, and as autonomous devices are connected (“the Internet of things”), the opportunities for cybercrime will grow. Cybercrime remains a growth industry .” In this regard, several ECTEL Member States have enacted relevant Cybercrime legislation developed at the OECS and CARICOM levels.

All of these issues require the right legislative and regulatory framework to ensure that consumers benefit and are protected in the digital economy. In its 2014/2015 State of Consumer Protection Report, Consumers International highlighted the following as deficiencies in consumer protection globally and an intelligent guess would indicate that this is also the situation in the ECTEL member states.

1. Ineffective legal framework in response to developments in the digital economy
2. Lack of sufficient protection and appropriate legislation as well as low awareness and underdeveloped digital economies
3. Inadequate dispute resolution offered by providers

ECTEL and the NTRCs are well on their way to addressing these deficiencies with its current effort at legal and regulatory reform. It is therefore incumbent on governments, regulators, providers and consumer advocates to aggressively and collaboratively address consumer empowerment and awareness going forward.