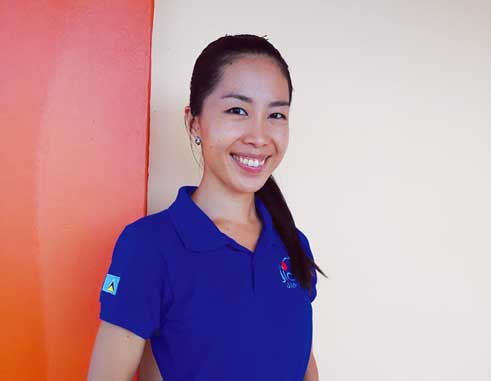 THERE is one thing I’ve found that all my WOTW have in common and that is a big heart. However, when that heart plucks you up from your homeland and leads you to another country just so that you could practise and promote goodwill, that’s when you know that your heart is not only big, but it is also golden.

NozomiImoto is definitely carrying a heart of gold around as she actively sought to find a cause so that she could dedicate her time and efforts towards helping out and making a difference in the world.

The 29 year old is a Japanese Youth Field Officer who came to St. Lucia two years ago with the Japan International Corporation Agency (JICA) as part of a Youth Exchange Programme.

However, since July last year, the friendly and sociable Imoto, who was assigned to work with the St. Lucia Red Cross, decided to take it upon herself to do what she could to keep St. Lucia clean and beautiful.

So she rallied up some help from Japanese friends and locals alike and went around doing just that through a Cleanup Programme for over one year.

When asked why she felt the urge to do this, Imoto said; “It’s simple, I just want to live in a clean and beautiful world. Here, I focused on Gros Islet where I live because every time I go to Rodney Bay to shop or socialise with my friends, I don’t want to see littered garbage. In my home town, there is littering but here, the beauty of nature and St. Lucia made me feel more passionate about trying something for the sake of the environment. I am a visitor who is leaving soon, but in my memories, I will never forget my St. Lucian life. And when I go back to Japan, I want to spread and share the stories of St. Lucia, especially about how beautiful it is. So I thought, I don’t want to remember such environmental issues as well.”

She said one thing that is satisfying and comforting, is knowing that the situation is improving, so she knows that she did a good thing by starting the programme that she was in charge of.

Imoto revealed how adjusting to life in St. Lucia was no easy feat, but it is an experience that she will forever cherish nonetheless.
She said he biggest hurdle was the year round hot weather and the fact that she had to go out on a daily basis to visit different schools at the hottest time of the day…noon. However, with some great tips from locals, like carrying big water bottles as opposed to small ones, wearing shades to keep the sunlight out of her eyes and using an umbrella to shade her from the sun’s harsh rays, she was able to adjust in no time.

The other hurdle that she faced was the language barrier.

Imoto said; “With the language, it took time to get accustomed to the accent and dialect. For example, the locals speak slang and Creole, but it was also very interesting to see the way they express themselves. They use terms like “AA!”, “Awa!”, “Mama?!” and “Bondye, Bondye, Bondye” when they laugh and for many other things…I really like it!”

With Imoto due to head back to Japan in October, the JICA volunteer said the one thing she will absolutely miss the most is the taste of St. Lucia: “I love the St. Lucian food and my favourite national event is JounenKweyol, because they sell many of my favourite foods like cucumber salad and bakes and saltfish…maybe that’s why I extended my period of time volunteering. I actually extended it for four more months because I was supposed to go in July.”

As always, I talked my WOTW into revealing something about herself and her revelation was an interesting one that showed that you should never judge a book by its cover but then at the same time, it kind of placed her right in the bracket that Japanese and Asians in general are usually slotted in.

She said; “My hobby is karate. The surprise is that I started it when I came here in St. Lucia. Although Karate is from Japan, I was never interested in martial arts because I thought it was for boys. However, there was a Japanese lady who came here with me two years ago and she was doing it. In my second year here, since I wanted to keep fit and adapt my body to this very hot country, I decided to start it.”

Let’s just say that you wouldn’t want to mess with her in a dark alley, but at the same time, her revelation just added to my theory that women are just Super Sheroes no matter what part of the world they are from.