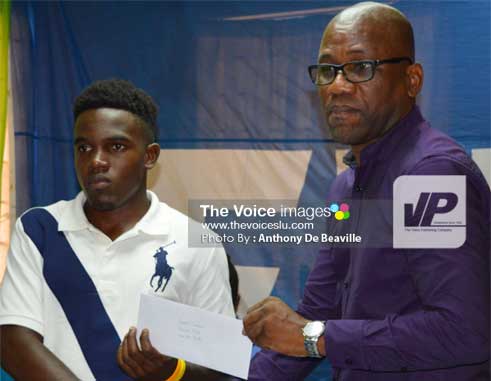 Addressing the young footballers and their parents Grace Representative Keneene Betty Ford said: “Grace is a company that is very interested in sports. We support sports in whatever island we are in; in Jamaica we were part of Olympic team, we support them very heavily. Importantly we want to do the same in St. Lucia and as a result we have decided to partner with the SLFA and Vizions Entertainment to support the scholarship programme that is currently in progress”.

She continued: “We would like to say that we are very happy to be part of this programme. Last year we had five hampers that were issued on a monthly basis to all the parents. This year the number has doubled and we are still interested in being part of the programme and ensuring that your nutrition is at the forefront and you don’t have to be worrying about the groceries you need to buy. We take care of that element of it.

Youth and Sports Officer Ligorious Marquis said the ministry was very thankful that the sporting associations especially football in collaboration with Visions Entertainment and Grace was able to provide such an initiative.

He said: “We are looking at the intention of the SLFA, Vizions and Grace having moved to what we consider well rounded development of the individual; life and personal skills. In the past the focus was basically on the skills of the young players and at the end of the journey, some of the young persons become unemployable. Why? Sometimes it’s their personality, they lack interpersonal skills. They do not have the skills that are required to enable them to be employed. I want to implore you – the SLFA, Vizions Entertainment and Grace– all of us at the Ministry of Youth Development and Sports to work in partnership”.

Vizions Entertainment CEO Edward Fedee said: “When we came up with the concept of Super League Championship one year ago, our intention was always to look at how we could develop the social development of people. Our focus was not only on organizing a football competition where the intention was to make money and walk away. From 2015 we started with innovated programmes in our football. We were collecting food items at the gates for vulnerable persons. Grace partnered with us in our first year to double whatever items were collected at the gate and to make the contribution to the Feed the Poor programme run by Gaspard Henry. This year, we extended an invitation to Grace to continue their support in terms of continuing our scholarship programme. And again Grace accepted to be part of this initiative”.

He continued: “We are re extending our intervention in football, come October, together with the St. Lucia Football Association, Vizions Entertainment will be undertaking the first ever junior, under – 21 Super League Football competition. Ultimately our intention is to ensure that we have football competitions at various levels”.

“In the coming month or so, in collaboration with the St. Lucia Netball Association, we will be launching the inaugural intersector Super League Netball competition. We want to make a difference by assisting in the overall development of sports in general in St.Lucia”.