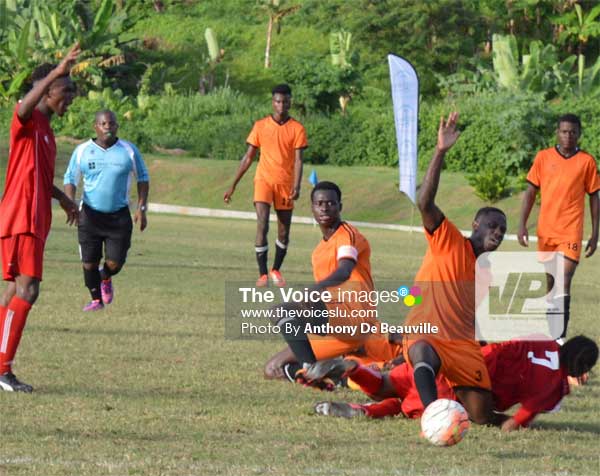 On Sunday Chester’s take on Monarch at Grand Ravine and RY.O come up against Togetherness Youth at Richfond. All three matches will commence 4:00 p.m.

In the other game played at the La Ressource playing field, Aux-Lyons United could not have asked for a better start to their title defence as they brutalized Young Generations with a 9 – 0 victory margin. Scoring for Aux-Lyons United were NilbertJn Louis with four goals, Sherwin Simon and Leus Alphonse with two goals each and Rick Jack, one.

In the other encounter played at the Grand Riviere playing field, Chester’s Sports Club made a bold statement in their opening match as they demolished next door neighbour Pumas Sports Club 6 – 2.

On Monday, Rovers United Sports Club comprehensively defeated Young Generations Sports Club by a 4 – 0 margin at the La Resource playing; scoring for Rovers United were Zachary Edwin in the 38th and 62nd minute, Kervin Francois in the 40th minute and Stephen Gustave in the 60th minute.

At the same venue on Sunday, the tournament’s opening game resulted in Togetherness Youth Sports Club edging out Survivals Sports Club 2 – 1 in a match reduced to 80 minutes due to a late start and early natural fading light.