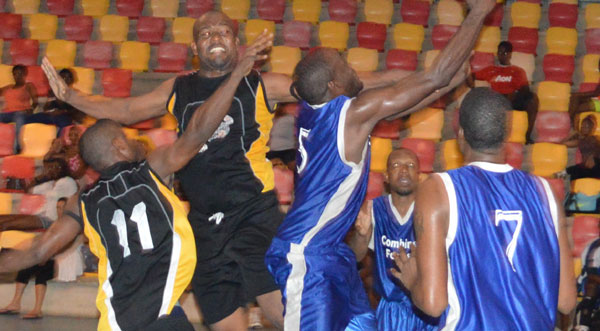 Sponsored
Share this post:
ONE game is on the card for tomorrow evening as the excitement and camaraderie continue in the group stage of the 2016 KFC Commercial Basketball League currently being played at the Beausejour Indoor Facility.

In matches played on Saturday in game 1, Digicel was able to survive their group D match-up against a Le Sport team with only five players as the game went down to the wire with Digicel leading by two points with 30 seconds left to go in the game.

Le Sport were unable to capitalize on Digicel’s turnovers in the closing seconds, committing three of their own, eventually losing the encounter 59 – 55.

In their second game for the week, FLOW were no match for Peter and Company Distributors, losing to the defending champions 77- 45.

Brothers Andre and Troy Louison continued their good run on form with an impressive showing of 19 points, 11 rebounds and 7 steals by Player of the Game Andre, while Troy chipped in with 13 points, 12 rebounds and 6 steals.

Meanwhile, former champions, the Saint Lucia Fire Service continued their dominance with a balanced attack to easily cruise to an 81 – 46 victory over Group B rivals Sandals.

In his first game in the league 2016, KFC Player of the Game Marcian Calderon led four players with double figures with 20 points, 14 rebounds and 6 steals.

The second half of the big man combo, veteran Desmond Vidal, raked in 16 points, 9 rebounds and ever consistent point guard Jerry Charles 19 points, 8 rebounds and 4 steals.

Kyanni Elwin put up a valiant effort for Sandals with 20 points and 3 steals.