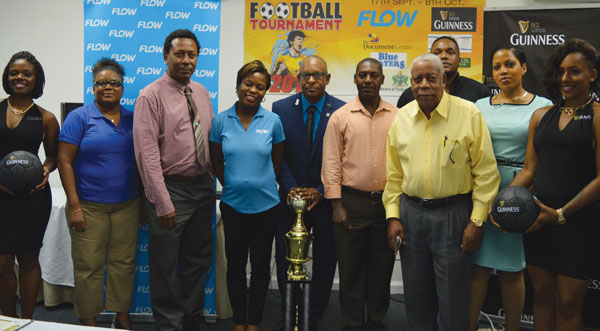 “FOOTBALL is Life” – That’s the theme for the Blackheart Tournament now into its fourteenth year.

On Wednesday the Blackheart Production team in collaboration with the St. Lucia Football Association’s Knockout Football Tournament held its press and sponsors launch at the Auberge Seraphine Hotel.

It was revealed that the tournament will be played at three venues this year, the Daren Sammy Cricket Ground, the Philip Marcellin Grounds and the Soufriere Mini Stadium.

A total of 16 teams will compete including last year’s champions Micoud. By all indications based on their standard of play for the last spot, the team to watch is the SLFA’s National Under 20 squad.

Like previous years the tournament will be played in accordance with the laws of the game set by FIFA and in conjunction with the regulations of the SLFA. The first place prize money is EC $25, 000. 00 with an additional $5000.00 going towards youth development for the winning team.

Speaking at yesterday’s launch was FLOW Marketing Manager, Shermalyn Sidonie – John who indicated that Blackheart and FLOW have had a relationship spanning seven years and they pride themselves on building relationships with organizations like Blackheart whose events capture raw talent and exemplify sportsmanship, community building and family togetherness.

Sidonioe -John said, FLOW’s support continues to be not just financial, but also service driven and throughout the tournament “our patrons can expect lots of excitement, special offers and giveaways.”

Platinum Sponsor Guinness through their Brand Manager Rohan Lovence reaffirmed Windward and Leeward Brewery’s commitment and sponsorship of the tournament for another year.
Managing Director of Blackheart Productions, David Christopher said, “This year’s tournament is expected to be one of the best. It’s in the memory of our stalwart Brian Mc Donald, who passed away in the line of duty in January”.