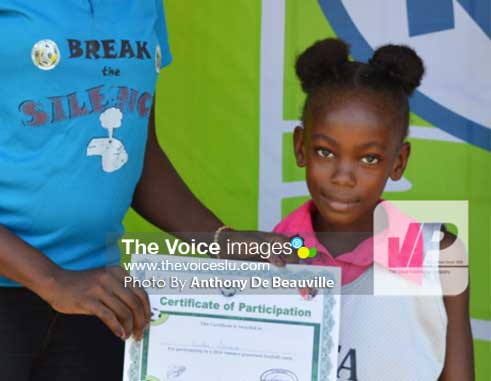 THE 2016 Ti Rocher Grassroots Football Camp and haircut initiative in collaboration with the Saint Lucia Football Association ended on Tuesday as over 70 boys and girls between ages 6 and 15 years took part in a three-week developmental camp at the Beauchamp playing field.

With that in mind, the DFL together with the Ti Rocher football club, initiated a three week programme in which they were engaged in learning the technical and practical aspects of the game as well as developing good social habits that will be very beneficial to them in the future,” he said. Also addressing the young aspiring footballers and parents was SLFA president, Lyndon Cooper who said the SLFA has pledged its commitment for the next four years to continue with the programme and by extension the entire community that makes up the Ti Rocher and Desruisseaux Football League.

“For the SLFA, it is exciting to be here and to reassure you, the three participating clubs that you have the additional support of the continuation of this programme. We have now added another 75 children to the database of the SLFA which has over 6000 children already.” Cooper noted.