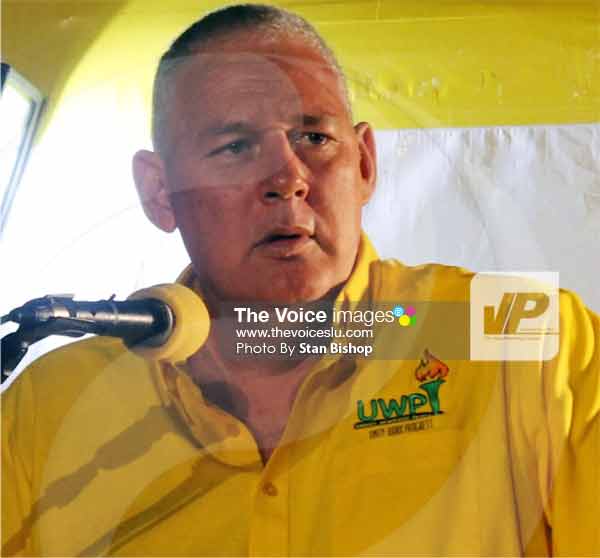 LEADER of the opposition United Workers Party Allen Chastanet says the aim of his party in government would be to build a new, prosperous and progressive St Lucia, free of poverty.

Chastanet’s declaration is contained in a message to all St Lucians printed in his party’s manifesto:
Beloved Saint Lucians,

It is indeed a privilege and an honour to address you as the Political Leader of the United Workers Party and the Candidate for Micoud South on the eve of the 2016 General Elections. For me, this desire to become the Parliamentary Representative of the people and the leader of a team of multitalented representatives of constituencies throughout Saint Lucia is in keeping with my lifelong efforts to improve the standard of living and quality of life of increasing numbers of fellow Saint Lucians. Throughout my life I have worked hard to create employment and wealth for all the stakeholders in the businesses I managed. But even though I was successful in doing so, I found myself surrounded by poverty and deprivation throughout Saint Lucia. As a caring person, the presence of poverty in our environment has been very distressing.

Then in 2006, I was appointed Minister for Tourism and Civil Aviation by my mentor, Sir John Compton who came back from retirement to implement a Master Plan for the sustainable development of Saint Lucia. Unfortunately, that process was interrupted by the death of Sir John in 2007, followed by a devastating global recession in 2008. Despite these challenges, Tourism received a boost to become our major economic sector; and the economy was stabilized. Under the leadership of the Hon. Stephenson King, we rode out the worst years of the global financial crisis and the initial impact of the recession. However an impatient electorate voted the United Workers Party out of office in 2011.

Since 2011 Saint Lucia has been reeling under the regressive policies and programmes of the St. Lucia Labour Party. They failed to learn the important lesson of the recession that you cannot spend what you have not generated; and in doing so have racked up the national debt to dangerous levels. The cost of servicing the national debt and the escalating requirement to give hand-outs, have forced the Dr. Kenny Anthony Administration to introduce more and more austerity measures that are crippling the economy and increasing poverty throughout Saint Lucia. The strategy obviously is to make voters more dependent on the government for desperately-needed “survival gifts”, as a means of controlling them.

During the past 5 years, while the SLP was tightening its grip on the electorate, the UWP has been drawing up a list of strategies to empower Saint Lucians; to offer them equal opportunities to realize their potential; to put the given human and natural resources to best use; and in the process to enable people to find or create employment and receive their fair share of the wealth so created. The goal is basically to diversify and grow the economy; to generate enough revenue to pay for social services; and to put money in people’s pockets to meet their needs.

The UWP has also drawn up plans to reinforce the principles and institutions of good governance. Ordinary people will be given individual and collective responsibility for the pursuit of justice. In particular they will advocate for the fair distribution and safe enjoyment of the wealth that is jointly created in Saint Lucia.

At the highest political level, the UWP has put together a team of candidates, all of whom have previously succeeded in at least one career; all of whom have had management training and/or experience; and all of whom are committed to the principle of the equitable distribution of wealth. Among them are four strong, accomplished women who will oversee the pursuit of the UWP’s goal of better gender relations. Our main goal is to motivate Saint Lucians to build a new Saint Lucia that is both prosperous and progressive. We want to wipe out poverty and to strengthen the social safety net to prevent any Saint Lucians from slipping through to poverty and despair.

The UWP is now a united and reinvigorated Party that is ready to complete the work that was started in 2006. We humbly ask you to vote for our candidates in Micoud and throughout Saint Lucia. At this point in its history Saint Lucia deserves better management of its economy and society in order to realize the vision of a better life for its people in the highly competitive global village of the 21st century.