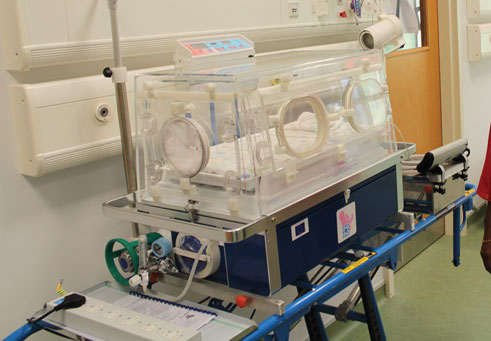 Project Engineer, Wendell Bernard and Commissioning Director, Dwight Calixte facilitated the Minister’s two and a half hour guided tour of the facility. Also in the touring party was Permanent Secretary, Cointha Thomas and members of the Commissioning Team for the new hospital.

The Minister was quite impressed with the work done thus far, the quality and sophistication of equipment and the general layout of the Owen King EU Hospital gave. She said later:

“I must say, this is a beautiful facility. I am really very impressed. I believe that this is world class. It is really above all the rest that I have seen and I think it will more than meet everybody else’s expectation. We have been told that it is on track in terms of delivery time to us and I believe all St. Lucians will be very happy to hear that. I am really amazed at what I have seen in the hospital, the pieces of equipment that are in there. The CT Scan, the MRI, all the equipment that we did not have that people had go to Martinique, Trinidad, the (United) States for, we have it all inside this hospital.”

Isaac also got the opportunity to see the high quality furniture which was recently delivered to the hospital by various contractors to fully outfit the facility with top of the line furniture.

As the commissioning team gears up for the transitioning of the Victoria Hospital to the Owen King EU Hospital, the Minister was informed that much more equipment, furniture and supplies such as specialized beds, will arrive in the coming months.

“So I believe this is a state of the art hospital and it will do St. Lucia well. It may even be the best in the region.” Isaac stated.

The Owen King EU Hospital is the largest infrastructural project ever executed by the European Union (EU) in the Eastern Caribbean. The EU funded both the construction and equipping of the ultra modern care facility to the tune of EC$167 million. The hospital is designed to be energy efficient and resilient to hurricanes and earthquakes.