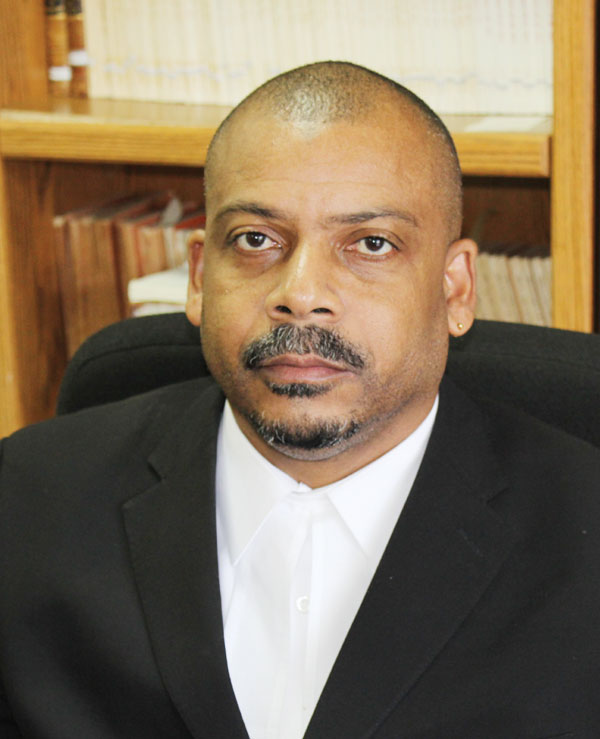 BRINGING the IMPACS situation to a level which would satisfy both America and the European Union may very well be the job of Hermangild Francis , the country’s new Home Affairs and National Security Minister, rather than that of the newly appointed deputy Director of Public Prosecution Stephen Brett.

Brett, whose appointment became effective last Monday told The VOICE that he would prefer that the Minister handle IMPACS leaving him with the tremendous task of reducing the backlog of more than 1600 backlog of cases confronting his office.

“My focus right now is to continue to maintain a team oriented environment at the Crown Prosecution Service. As long as we can do that then we can tackle what is perceived by the public to be the main problem, which actually is the main problem in the criminal justice system, the backlog of cases,” Brett said.

His appointment to the post is really not surprising Brett having been a member of staff in the Crown Prosecution Service for several years and holding the fort as the most senior member of staff when Victoria Charles-Clarke, the former DPP, left on pre-retirement leave about six months ago.

Brett is a former police detective and Court Prosecutor with the Royal Saint Lucia Police Force, which he served for about 23 years. He is a graduate of Holborn College and the University of Wolverhampton in England with an Undergraduate Law Degree and a graduate of Northumbria, also of England where his field of study was law.

He said that he wants to tackle the backlog of cases with gusto as this would mean faster movement of new cases through the system.

“Reducing the backlog which will help new cases move faster through the system will improve the public’s perception of the Crown Prosecution Service,” Brett said.

“Our objective at this time, short term, is to dialogue with the defence counsels, the victims and the police investigators involved in those cases with a view and a focus to eradicating the backlog,” he added.

“The main objective is to move on and try to eradicate the backlog,’ he added.

The Crown Prosecution Service has already started work on reducing the backlog of cases by engaging more judges to tackle a certain amount of cases this year.

“From January to now of this year we were on a mission to drastically reduce the backlog and so we fast tracked the process with all of the judges and were able to get rid of about 300 cases within that time,” Brett said.

To be able to reduce the original backlog of 1900 cases by 300 was considered remarkable by Brett who said that the Crown Prosecution Service intends to carry out a similar exercise very soon “so we could get the wheels of justice turning as they should be and not as sluggishly as it has been in St. Lucia due to lack of resources.”

“It does not necessarily mean that all 300 cases were convictions, but we got them out of the system. There were old cases, cases that were not going anywhere at all, however we got some convictions. We intend to continue in that vein and hope that the public has patience,” Brett said.