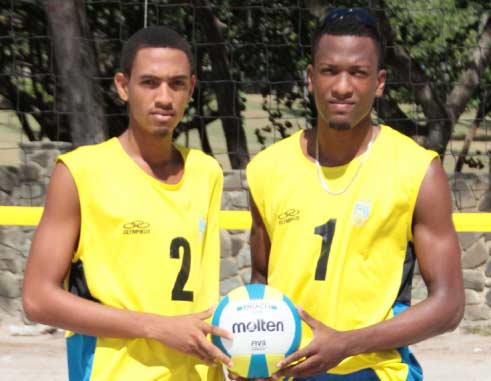 THE beach near the Landings Resorts located in Gros Islet will be a hive of volleyball activity today as matches continue in the 3rd Round of the Rio Olympics Qualification Tournament for Men, “The Continental Cup.”

Twelve Countries from three of the Zones in the NORCECA Confederation are each fielding two teams in this tournament.

According to the St.Lucia Volleyball Association President Brian Louisy, the games started yesterday and will continue today and Sunday and start from 9:30 a.m. if needed, matches will be played into early evening under lights.

From the Eastern Caribbean Volleyball Association St. Lucia and St. Kitts are the only representatives, other teams come from Trinidad, the USVI, Jamaica, Suriname, Curacao and Barbados, El Salvador, Guatemala, Nicaragua and Costa Rica.

Louisy said, the Association has struggled to get financial support for this event but its traditional corporate supporters are expected to contribute and help ensure a successful event. The Saint Lucia Olympic Committee has provided a contribution of $5,000.00, while the Ministry of Youth & Sports has committed.

Meanwhile, the Association is buoyed by the just-in-time return of Professional Player, Julian Bissette, who ended another successful professional year in the Greece First Division where he was voted the Best Middle Player. Biscette will partner with his familiar face Joseph Clercent, while raw and unproven Tevin St. Jean and Darnel Eudoxie will form the second St. Lucia team.

The Tournament will pit country against country in Davis Cup Tennis type format. Six spots are available to the fourth stage in Mexico where teams will battle for spots to Rio Olympics Games.

This year SLVA is using the beach area near Landings, where three tournament courts have been established.