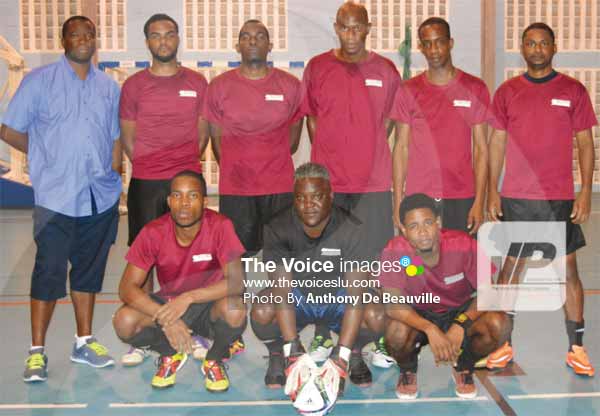 THE Commercial Futsal League kicked off in grand style on Wednesday evening at the Beausejour Indoor Facility and based on the intensity in the matches played and the crowd support on the opening night this year looks like it’s going to be entertainment from start to finish.

The highlight of day one was a hat trick scored by LUCELEC’s Chad St. Claire and the 2015 defending champions going down to Caribbean Metals in as exciting match up.

In Game one despite a 30 minutes late start LUCELEC trounced new comers Domino Pizza 8 – 1. At the half LUCELEC led 5 – 0 with goals from St. Claire in the 3rd, 7th, 13th minutes to score the first hat trick of the tournament. No. 4 Lucius Prospere’s strike in the 17th minute made it 4 – 0 and St. Claire made life difficult for DP when he scored his fourth in the 18th minute.

On the resumption the flood gates opened almost immediately when Christopher St. Marthe scored in the 21st minute. The star on the night St. Claire was again in the thick of things when he scored his fifth in the 28th minute and No.10 Ryan Augustin made it 8 – 0 in the 34th minute.

In the dying moments of the encounter there was a loud cheer coming from the crowd for Domino Pizza when Eden Eugene found the back of the nets in the 37th minute to make it 8 – 1.

Game No. 2 between the defending champions Peter and Company (Grace) and Caribbean Metals was the talk of the night as the champions went down 2 – 1 in an encounter that went down to the wire. The action packed match up saw five goals scored, one penalty saved by the Caribbean Metals custodian Iran Cassius and one yellow card a Peter and Company (Grace) player.

Mario Daniel captain for Caribbean Metals put his team ahead in the 9th minute as Peter and Company was caught flat footed immediately following a one minute time out, PerciusNarcisse doubled the score line in the 12th minute to send their supporters into a mini type celebration, but William Nilan pulled one back for Peter and Company in the 19th minute to cut the deficit at the half time whistle.

On the resumption both teams stepped up their game and in the process missed out on a number of scoring opportunities. In the 31st minute Gaston Jerry found the back of the nets with a strike that eluded Caribbean Metals Iran Cassius to his left for a well deserve equalizer. From here on it was all to play for as neither team intent on playing for a draw, Narcisse’s second goal in the 39th minute, in fact at the final whistle gave Caribbean Metals a 2 – 1 hard fought victory.

In the final game of the night ECFH nosed over Bay Gardens Resorts 2 – 1. At the half time while the scores remain goalless. On the resumption two quick strikes from Martin Gustave in the 33rd and Jerome St. Omer in the 34th minutes respectively set the BIF ablaze Bay Gardens Resort pulled one back in the 39th minute through their No. 10 Elran Wilson and that’s how the scoreline remained up until the final whistle.