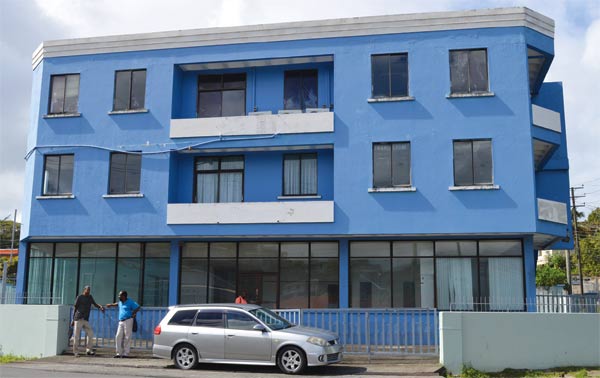 MEMBERS of the local media fraternity got an opportunity Thursday morning to visit the newly acquired building which will house the offices of the St. Lucia Olympic Committee Incorporated (SLOC Inc.)

The three storey premises purchased at EC$1.7 million is located at the Vide Bouteille, La Clery junction and was formally handed over to its new owners earlier this month. The SLOC Inc. is projecting that it will take at least six months to have it fully refurbished at a cost of EC$100,000.00 before it can be occupied. In the meantime, operations of the organisation continue to be conducted from their Barnard Hill location.

” This new building gives us more space and the opportunity to cater for affiliates in a much better and comfortable manner and to do some things that we were not able to do in the past, ” Chairman of the building committee and former President of (SLOC Inc.) Richard Peterkin said Thursday.

Peterkin said owned headquarters for SLOC Inc. had been in the offing for quite some time and he was pleased that the Committee was able to achieve such a goal.

“We have been planning for this over a number of years and it is pleasing that we can have somewhere to call home. We will be in a better position to serve our affiliates and sports in general and provide additional facilities for development as we go along. It gives us an added opportunity to spread the whole idea of the Olympic movement, ” he said.

Local media personnel were accompanied on the tour by other executive Board members of the SLOC Inc. including President Fortuna Belrose, Secretary General Alfred Emmanuel and Public Relations Officer Ryan O’ Brian. Affiliates were well represented on a similar visit Tuesday evening.