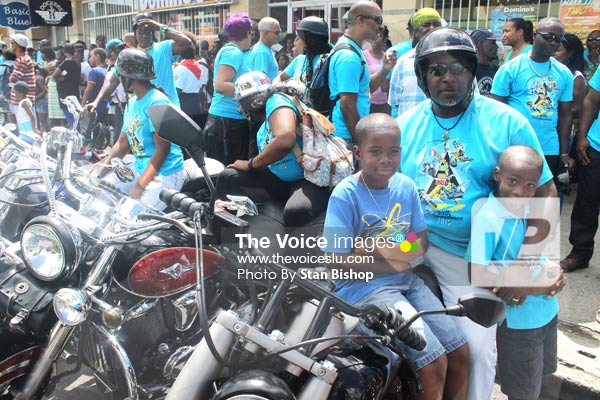 THE past Independence weekend was indeed an eventful one. To quote dub poet, Ras Izley, there was somewhere to go and something to do. Some patrons even got a taste of something to aspire to.

The action-packed programme proved challenging for many people who found themselves crisscrossing from one event to another, sometimes with no intermission. But that was by design as one of the main organizers, creative consultant Christopher Hunte, had indicated that patrons would not be given any reason to not participate in at least one event.

Motorcycle races, food and fun dominated the city circuit on Sunday when the Castries Waterfront was transformed into a street bazaar/racecourse. Saint Lucian products and pride punctuated the day’s activities with scores of people taking in the sights and sounds.

Independence Day began with the military parade at Mindoo Phillip Park where uniformed groups were inspected by Governor-General Dame Pearlette Louisy. Hundreds of people, many of them dressed in the national colours, waved flags and they cheered the uniformed groups’ demonstrations of precision.

Mindoo Phillip Park remained ground zero for the rest of Independence Day proceedings, with a cultural expo, celebratory rally, dance competition (which was won by dance group, Fundamentals, from Anse La Raye) and the SLAM concert that featured an all-Saint Lucian cast of musicians.

If anything, the weather held up wonderfully during the past weekend of activities, although many people admit that their non-attendance at some of the proceedings was due to blisteringly hot sunshine. Nevertheless, those rays of sunshine did not seem to deter those who did come out to celebrate the island’s 37th anniversary of independence.