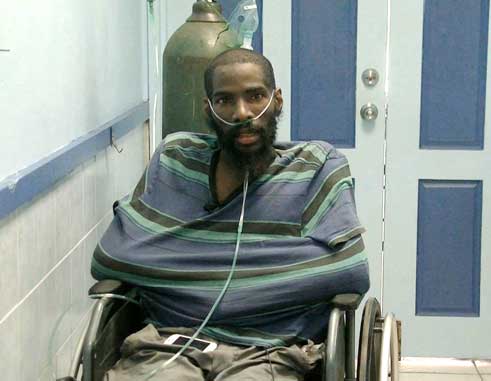 Doctor at VH Warns of Growing Epidemic Among the young.

DOCTORS at the Victoria Hospital (VH) are calling on the public particularly young men and women to desist from a dangerous practice which is literally killing them but not before making them “respiratory cripples.”

Medical Director at Victoria Hospital, Dr. Lisa Charles said over the past 10 years she has seen an epidemic emerging with an increased number of young patients suffering with Chronic Obstructive Pulmonary Disease or COPD.

She said patients who smoke marijuana mixed with tobacco are developing COPD at an extremely young age. “We are talking about young men and women in their 30s with end stage lung disease. And by end stage lung disease I mean they are no longer able to carry out any normal activity, such as cooking, walking from the bed to the bathroom because of severe shortness orbreath”, Dr. Charles stated.

COPD is an extremely debilitating, progressive disease which directly affects the lungs. The effects of COPD cannot be reversed. Patients with the disease are literally confined to a bed with oxygen tubes up their nostrils 24 hours a day, 7 days a week.

“Because any degree of exertion, any degree of activity causes shortness of breath to the point where you have to stop, you have to sit, you cannot do any of those normal functions that you can do for yourself “, Dr. Charles added.

The medical d2irector indicated that available bed space at VH is severely compromised as a result of this increasing epidemic of COPD in patients. “So upwards of 12 patients per day require some degree of treatment for their breathing difficulty. In terms of patients who are end stage which is my primary concern we probably have what we call a revolving door patient population of close to 15 – 20. These are patients who literally come to A&E either daily or weekly because their disease is so far progressed that they need that level and that frequency of attention in the emergency department and on the wards. We do also have patients who have lived at VH for the last several months because they can’t take care of themselves at home and they have no option but to stay with us because they need continuous oxygen and full care.”

Sherman Esnard is one of the patients who currently suffers with COPD. When we spoke to Esnard he had been an a wheelchair in the A&E Department for five days completely dependent on an oxygen tank.

Esnard who earned a living as a carpenter recalls being an avid football player, which he could do no more. “Who wouldn’t miss that. To be a young active feller and you cannot do any of these things again.”

The young COPD patient admitted that breathing was very difficult without a constant supply of oxygen. He spends most of his time between his home and the Victoria hospital and can’t last a minute being disconnected from an oxygen tank.

When asked what he thinks contributed to his COPD he lamented: “I know smoking has to do with it, smoking has a big part to do with it…I see people smoke more than me but they don’t have that problem. Maybe our bodies are just different but smoking has a part to play.”

COPD is not just physically debilitating but financially as well for the patient and also the family. “Financially I don’t think anybody wants to be like me at this point. Financially I’m ripping a hole in my people’s pockets right now. I cannot afford to buy an oxygen tank. The tank you see behind me I cannot afford that, it’s too expensive…I can go through three of these tanks and $200 for one so do the maths. Think of that for a week, for a month, for a year”, he added.

A visibly emotional Esnard made a strong appeal to young persons to stop smoking and kick the habit. “Well, I know the feeling of smoking, you feeling nice for a while. But it’s only for a while. If you reach that stage where you have COPD, it’s all over. If you’re not strong mentally I think you will be gone even faster too…So imagine you cannot do anything for yourself as a strong young feller just down in a flash. Smoking is not worth that. If you’re smoking today just take a look at me and just try to drop it, everything, just try and drop it. It’s not worth losing your life, your family or anything so just put down the cigarette and make a change.”

Esnard said what he misses the most is not being able to take care of his daughter the way he wanted to as a father.

The Victoria Hospital is optimistic that through public education and sensitization the COPD epidemic will be stemmed, more lives will be saved and less pressure brought to bear on the health institution.

The Pan American Health Organization indicates that Chronic Obstructive Pulmonary Disease (COPD) is a leading cause of morbidity and mortality in the Americas, representing an important public health challenge that is both preventable and treatable. COPD caused over 235,000 deaths in 2010, ranking as the sixth leading cause of death in the Americas. About 23 percent of these deaths occurred prematurely, in people aged 30-69 years.