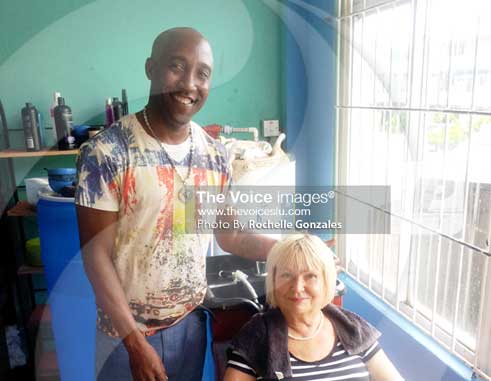 Sponsored
Share this post:
IN the world of hairdressing, well at least in Saint Lucia, it would be a no brainer to guess that women are the ones leading the field whilst men choose the barbering route. It has always been this way…that is until today’s FITC proved differently.

Mathew Eugene has been styling women’s hair for 25 years and you can call him the modern day “Edward Scissor Hand” as his signature cuts have left him with a dedicated fan base.

The stylist who owns a salon in Castries, said he saw a piece that I wrote in last week’s paper and thought that it would be fitting to tell his story as a rare (in St. Lucia) male hairstylist.

Born in Bexon but residing in Castries, Eugene tells about the opportunity that he grabbed with both hands when he left St. Lucia and moved to the U.S to gain his qualifications and experience in the field.

He also addresses the boundaries set for men in his position and tells why male hairstylists are a necessity.

The VOICE: What inspired you to go into hairdressing?

Matthew: From a young age I’ve always wanted to be self employed, self reliant and self sufficient and that was one way for me to express my creativity too. Hairdressing wasn’t something that I was inspired to do at a young age but it was an opportunity given to me and I took advantage. That’s why I’m a hairstylist today.

The VOICE: This is a predominantly female profession in St. Lucia. What is it like competing against all these women?

Matthew: I think the clients feel safe and secure with male hairdressers. I think males offer a little bit more perfection, precision and honesty in terms of styling hair. You would find many female hairdressers, I don’t really want to say do it for the money, but they don’t really have as much passion as men do. I think men bring a little bit more passion and since it’s a female dominated industry, you find a lot of women tend to believe that because they are women that they are naturally better than men in this industry but I don’t think this is the truth. I think that especially now, men pretty much dominate this industry because if you go to the U.S and Europe, you will find that a very large percentage of men are venturing out into the industry.

The VOICE: Some women might refute your claims and argue that women know what women want so they are in fact the best choice, how would you respond to that?

Matthew: Well, yeah, maybe in some aspects but I think as men, we tend to want to see women look a certain way and we want women to look good so they will put their all into making sure that the female clientele gets the look that they themselves would want to see on a woman out there on the streets. I think it’s also the male factor where women feel more comfortable when a guy is doing something for them in terms of their hair.

The VOICE: Many people automatically assume that since hairdressing is a female profession, men who choose that path are either gay or bisexual, what can you say about that assumption?

Matthew: I think there’s a lot of stereotyping in the business and I don’t think I can change it. As a male hairstylist, people always assume that a guy doing hair has to be bisexual or gay but that’s so far from the truth. I think it goes back to somebody’s ability to be creative, being an artist. Artistic work comes in all types of professions be it clothes designing, hairstyling, cake decorating and all that, they fall under the same bracket. So I think it’s ridiculous for people to think that once you’re a guy doing hair that you have to be “on the other side”. I think it’s better to get to know someone and don’t judge them based on what they do as a profession but more on the content of their character. There are many men in this business that are bi or gay but that does not apply to everybody because there are persons that are straight with families, wives and children and they’re great hairstylists.

The VOICE: What’s your strong suit?

Matthew: Well, here at Matthew’s Hair Salon my strengths are cutting and styling. I also do colouring, relaxing and weaving. I’m not too much into the braiding but the natural thing for me is cutting and styling. I’ve had a lot of training from the United States and I think I’m one of the best hairstylists around but it does come with its challenges and ups and downs. You have to be very patient sometimes in this type of business and you have to be able to explore your creativity in terms of styling and doing different things like that.

The VOICE: There is this trending movement where women are turning away from the relaxers etc. and going natural, do you feel threatened by that?

Matthew: No, not really. I know out there, there are women who have to maintain a dress code and because of that, they have to look and feel a certain way so even though the natural look is always going to be there, the chemicals are always going to be there as well because there are women who have no choice but to maintain that look. It also goes back to comfort, convenience and familiarity.

The VOICE: Men are usually encouraged to go into barbering. If they have any interests in hairstyling, what would you say to them?

Matthew: If you really want to be a hairstylist, to me you shouldn’t let anything stop you or let anyone put you off with stigmas of sexuality. Go out there and learn, give it a try and if you feel it’s something that you can do for a long period of time or as a career profession then go all the way. Don’t be scared of what people are going to say because people will always talk good and bad but you can’t let that stop you or deny you from pursuing what you want to do.

The VOICE: Whilst in Europe and other countries, male hairstylists are popular, that is not the case here so what would you say to women to assure them that you are the real deal?

Matthew: I think you should give it a try because it’s an experience of a lifetime. I think you will really enjoy the whole idea of a man giving you a shampoo and styling it…it’s a nice experience. So if anyone has reservations out there, they need to just put that aside and give it a shot. Allow a guy to do your hair for a change and you just might like it.