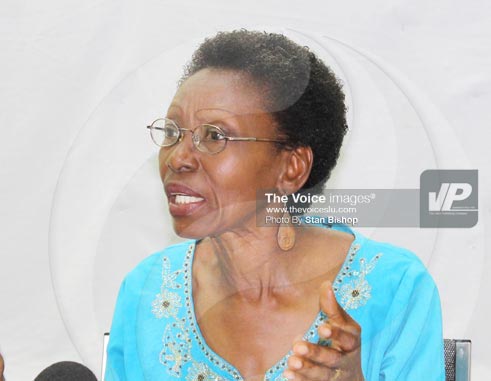 Sponsored
Share this post:
COORDINATOR of the National Centre for Legal Aid and Human Rights Inc., Attorney at Law Mary Francis says there is much work to be done in St. Lucia for the full enjoyment of civil, political, economic, social and cultural rights.

In a message to mark International Human Rights Day today, Francis referred to a number of recent occurrences in St Lucia and said the country has fallen short in terms of inadequate legislation, manpower and support structures in support of the enjoyment of full human rights.

The following is Ms. Francis’ statement: ”It was on that day in 1948, that the Universal Declaration of Human Rights (U.D.H.R) was adopted by the General Assembly of the United Nations, ushering universal promotion and observance of human rights for the first time, and constituting the seminal document upon which all other Human Rights Covenants (Treaties) are rooted.

“The U.D.H.R came to be recognized as an historic document articulating a common definition of human dignity and values. It has been described as the yardstick by which to measure the degree of respect for and compliance with international human rights standards everywhere on earth.

“On this International Human Rights Day the United Nations office, in order to raise awareness of the two Covenants on their 50th Anniversary, is launching “Our Rights. Our Freedom Always” which is a year long campaign to emphasize that human rights are inalienable and are inherent in all persons everywhere worldwide.

“The effect of ratification of the two Covenants by any state, places a binding obligation upon that State, to undertake policies and measures, and establish Institutions to ensure the implementation of the provisions contained therein.

“The question may be asked: where does St. Lucia stand as regards ratification and implementation of the two International Covenants. On 5th November 2015 during what is termed the Universal Periodic Review by the United Nations, St. Lucia’s human rights record was examined. It was recommended in the report which followed that St. Lucia should ratify the two Covenants as well as the two Optional Protocols to the International Covenant on Civil and Political Rights one of which creates an avenue to allow citizens, whose rights have been violated by the State to file a petition to the United Nations Human Rights Council thereby serving a very important international machinery.

“Is there a cost for ratification? Such cost relates to ensuring through financial and personnel investment, a proper functioning justice system to protect the rights of all St. Lucians. Ratification should no longer be avoided therefore. St. Lucia can and must do better and take its place among other states which have ratified these Covenants.

“Over the past years and especially this year, the dire state of the justice system has been cause for grave concern as this has led to a violation of human rights in so many ways. We are all too familiar with the large remand population, bursting the walls of the Bordelais Correctional Facility comprising more than half the population at the facility, over 300, among which are 57 young men on remand for murder, all caught in the syndrome of long pre-trial delays, despite their constitutional right stipulation to be tried “within a reasonable time,” which right itself is also reflected in Article 9 (3) of the International Covenant on Civil and Political Rights. Article 9 (3) states: “Anyone arrested or detained on a criminal charge shall be brought promptly before a judge or other Officer authorized by law to exercise judicial power and shall be entitled to trial within a reasonable time or to release.”

“ The fact is since the adoption by the United Nations General Assembly of the Universal Declaration of Human Rights on 10th December 1948 and the several International Covenants, Conventions and Declarations emanating from it, the protection of human rights no longer lies within the sole domain of the State. The State is now superseded by the International Community. There are no more boundaries as we have experienced with the still unresolved 12 police killings in 2011.

Globalization has taken over. There is globalized trade, and this is also applicable to justice systems and the rule of law. There exists today a globalized standard of human dignity to be practiced by all States. Fundamental human rights are all about practising standards of behaviour which allow for freedom and human development which is the undying purpose of the existence of the State and government. It can be reasoned that we have embraced the practice of standards in business and services through the work of the Bureau of Standards. So why not accept standards for protecting the dignity of the human person as contained in the two Covenants – the International Covenant on Civil and Political Rights and the International Covenant on Economic, Social and Cultural Rights, the 50th Anniversary of which is being launched on 10th December, International Human Rights Day.

“There is much work to be done in St. Lucia for the full enjoyment of civil, political, economic, social and cultural rights which reinforces the interdependent nature and indivisibility of human rights (body, mind and spirit of which we are made). A number of incidents occurring this year (the increased rapes, murder of women, the murder of the little three year old boy by his parents, little Boaz discriminated against at his school and the shooting of a mentally challenged man in Soufriere,) have stepped up the temperature for respect and observance of human rights which include Rights of the Child, Women’s Rights, Rights of Mentally Challenged Persons, Housing Rights for those who are hastily evicted – the Cresslands victims of Soufriere and others.

“In all those areas we have fallen short in terms of inadequate legislation, manpower and support structures. St. Lucia can do better and must do better for everyone is entitled to be treated with human dignity without exception and lest it is forgotten, even those who have committed a criminal offence have their civil rights protected by the Constitution of Saint Lucia. Civil Society must play its role alongside the State, for there must be oversight of government action for the preservation of peace and democracy. St. Lucia needs more human rights advocates. Let each one help one.”