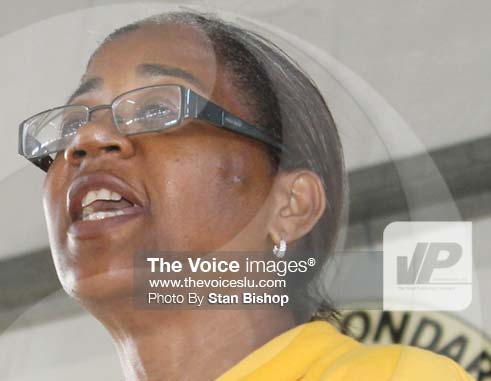 MARY Isaac is well on her way to becoming the United Workers Party’s number one loose cannon. Long past her days as the head of the Civil Service Association (CSA), the woman many people have hailed a hero for sticking it to the government over civil servants’ wages is now a raging force to be reckoned with in the Flambeau camp.

Isaac proved that she had more fire than even the UWP’s torch last Sunday when instead of delivering the vote of thanks at the party’s national convention, she delivered a low blow to former Prime Minister and UWP Political Leader, Stephenson King.
Featured speaker, Sir James Mitchell, former Prime Minister of Saint Vincent and the Grenadines, came dangerously close to hitting King with a yorker when he referenced political leaders from Canada, Britain and other locales tendering their resignations voluntarily whenever their parties were unsuccessful at the polls.

“What’s wrong with us in the Caribbean? We don’t know how to pack up?” Sir James asked the delegates.

Many of the delegates took Sir James’ remark jocularly and King, too, was seen holding onto a smile. After all, King had already had a few overs of fast balls from Chastanet who had issued a match advisory earlier to party members who think the UWP does not have what it takes to win the next general elections.

“They must do the honourable thing and step aside for this modernized United Workers Party will not be deterred.” Chastanet warned.

But for a long day of cricket that saw Chastanet and Sarah Flood-Beaubrun vying for the captaincy – albeit without the usual convention drama – something had to go wrong just so people could remember that the convention did indeed take place. Mary Isaac, a latecomer to the Flambeau team, turned out to be Darren Sammy on a good bowling day. She has a seamer up her sleeve for Steve.

Said Isaac: “I really like the part about ‘pack up’… And I, too, have a question for you: In what Parliament in the Caribbean or anywhere in the world do you have an ex-Prime Minister sitting as an ordinary parliamentarian?”

King had had enough of both the cryptic and flat-out rebuke and he and some of his Castries North delegates immediately exited the convention hall of the Gros Islet Secondary School. True to form, Isaac continued the vote of thanks without missing a beat. The match seemed over even though the official match results were announced afterwards.

Isaac would later defend her remark, explaining that King is indeed an “ordinary parliamentarian” by virtue of him not being either Prime Minister or Leader of the Opposition. When asked to comment on the matter, Party Chairman, Guy Mayers, told the media on Sunday that the matter would be dealt with internally.

The irony of the thing is that too much of Flambeau’s dirty laundry is being aired in the open despite the push for matters to be dealt with internally. In fact, Mayers did indicate during his “we are all in this together” address to the delegates. Judging from his narrative, Isaac went quite contrary to the new party mantra.

Earlier in the day, King told The VOICE that he did receive communication from Chastanet to finally have a sit-down this week with other members to sort out some concerns some party members have. King et al had sought an audience with Chastanet before the convention but the latter had indicated it was impossible due to his travel plans. Some sense of unity seemed in the offing until Isaac’s off-colour remark that left him red with disgust.

What’s troubling about Isaac’s remark, though, is that – based on her analogy — there are currently 15 “ordinary parliamentarians” occupying seats in Parliament. Apparently, Dr. Kenny Anthony and Dr. Gale Rigobert should count themselves lucky, especially the former. Why would constituents go to extraordinary lengths to elect a parliamentarian just so that their candidate stands the chance of just being, well, ordinary?

As the endorsed candidate for Castries South, Isaac should never consider herself to be an ordinary parliamentarian should she win that seat at the next general elections. Neither would I ever consider her to be anything but a strong trade unionist. Even while many CSA members saw a conflict of interest in her serving as both a UWP senator and CSA president simultaneously, she stuck to her game plan by playing both parts. It takes an extraordinary person to pull that off.

If you asked me, Isaac’s remark last Sunday was offensive and demeaning. While Sir James and Chastanet chose to be diplomatic in getting their messages across, Isaac was not. Especially when the party seems to be pulling out all stops to become the viable political force it once was, the electorate needs to see some level of maturity among the UWP camp despite that unit’s rifts. It makes one wonder how greater the measure of division the party is willing to endure before it really coalesces.

As an aspiring politician, Isaac might well want to consider that in a few years King might well be one of the party stalwarts who will be showered with many blessings. She also needs to consider why despite King’s dissatisfaction with the party – and his ceaseless rants – he remains the endorsed candidate for Castries North.

At the moment, King might not seem the best man for the job as Party Leader, but a day in politics can change so many times in a minute. Nevertheless, as a six-term parliamentarian who has won by landslides, we should at least admire the fact that he is humble enough to sit in Parliament to represent his constituents. That should at least make him extraordinary.