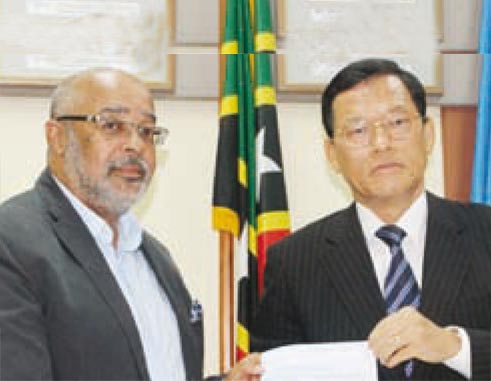 THE Republic of China (Taiwan) has presented a cheque totalling US$100,000 (EC$268, 820) to the relief effort now underway in Dominica following the devastation left behind by Tropical Storm Erika on August 27.

Taiwan’s Ambassador to Saint Lucia, James Chang, made the presentation to Director-General of the Organization of Eastern Caribbean States (OECS), Dr. Didacus Jules, during a brief ceremony held at the OECS Commission’s headquarters on Morne Fortune yesterday morning.

Taiwan currently has formal diplomatic relations with three OECS Member States: Saint Kitts and Nevis, Saint Lucia and Saint Vincent and the Grenadines. However, Ambassador Chang said despite Taiwan and Dominica not having diplomatic relations, Taiwan felt compelled to react to Dominica’s situation on a humanitarian level.

“I think it is very important that when we face catastrophe and disaster, that responses be made on a humanitarian basis regardless of whether the diplomatic links exist or not. We are particularly pleased with this contribution,” Ambassador Chang said.

The Ambassador referenced Taiwan’s support for Haiti in 2010 by providing monetary and temporary housing assistance when the French-speaking island was decimated by an earthquake. Taiwan also came to the aid of Japan following the March 11, 2011 earthquake there, as well as the Philippines and Palau following the passage of Typhoon Haiyan. Saint Lucia, too, benefitted from Taiwan when the Christmas Eve trough left death and destruction in its wake in December 2013.

Ambassador Chang extended Taiwan’s sympathy and condolences to the victims who lost lives and/or possessions following the natural disaster that resulted in several deaths and millions of dollars in damages to the Nature Isle’s infrastructure. He said he contacted his government immediately after the disaster to seek assistance for the affected OECS territory. Taiwan, he said, will continue to play its role as an international partner, especially when disasters strike.

“Taiwan has been an active participant in aid for international disasters and we will continue to fulfil this role as a provider of humanitarian aid. In conclusion, I would like to wish the Commonwealth of Dominica a speedy recovery from the damages caused by Tropical Storm Erika,” Ambassador Chang said.

Director-General, Dr. Didacus Jules, expressed thanks to the Ambassador for Taiwan’s assistance for Dominica. Dr. Jules said that in situations of disaster, the requisite cash infusion to get things done on the ground is important.

“Quite often in these disasters a substantial cash infusion is necessary to attempt to solve the immediate things that need to be attended to and to ensure that the economic impact of the disaster is mediated. So we are very grateful,” Dr. Jules said.

Dr. Jules added that OECS Member States have responded both individually and collectively to the crisis in Dominica. He said it was difficult at this point to quantify the relief effort “because so much has been happening”. The response to the Dominica tragedy, he told The VOICE, has resonated throughout the region.

“Perhaps more than any other disaster in recent times, this has really struck a humanitarian chord across the region,” Dr. Jules explained. “In discussions with the government of Dominica, they have repeatedly expressed their humility and deep appreciation for the level of response from the region, in particular, from the highest governmental level to the grassroots level.”

While the annual Dominica Creole Music Festival has been cancelled this year, Dr. Jules said there is a big push to have some form of festival, such as a “Live Aid” concert, to lift people’s spirits.