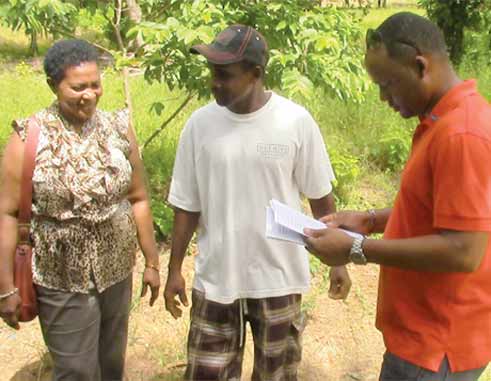 THE Rotary Club of Gros Islet continues to support the local community in fundamental ways through the Farmers Assistance Programme.

Recently launched, this project provided financial assistance to select farmers who had been severely affected during the now historic December 2013 trough. Each farmer received a soft loan which was to be used to re-invigorate their farms and jumpstart their livelihoods after this traumatic natural disaster.

This valuable project will continue throughout the 2015 – 2016 Rotary year, supported by the newly inducted board under the Presidency of Rotarian Dahlia Garia. Already, Rotarians have gone into the field to experience firsthand what these farmers are producing. Of the almost 20 acres under cultivation from the seven farms visited stretching from Morne Fortune to Babonneau, a variety of vegetable and tree crops are being planted and harvested. These include cabbages, cucumbers, parsley, papaya (paw paw), sweet peppers, hot peppers, lettuce, okras, string onions, bananas, plantains, passion fruit and tomatoes.

While the farms are at varying stages of efficiency and productivity, they all receive support from the Ministry of Agriculture through extension officers. When asked what the biggest challenge was to their crops and expected yields this year, there was consensus from most of the farmers that the severe drought conditions have been particularly damaging to crops. In fact, many crops were lost; replanting was underway, with an expected harvest this coming October/November for many of the farmers.

One farmer has been very frugal in managing his loan, and has, in addition to purchasing supplies to assist with drainage on his farm, repaid his loan in its entirety. He is looking to reinvest and to capitalize on further assistance from the Rotary Club of Gros Islet through what he hopes will be a continued assistance programme, in the coming years.

Rotary’s work in Saint Lucia is possible because of collaboration with the business community, including our main Charity Annual Golf Tournament sponsor, Pan American Life Insurance Company of the Eastern Caribbean. Rotarians have been challenged to “Be a gift to the world”. During the 2015 – 2016 Rotary year, this is what will guide their efforts in service to community.