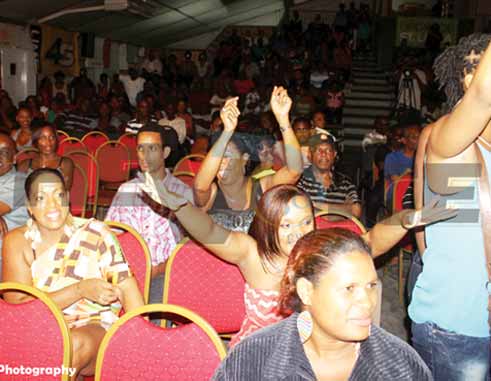 But 22 To Vie For Final Spots From Tonight.

THIS year’s calypso season might have been less than stellar compared to previous years when catchy punch-lines sent supporting fans into a fit. Nevertheless, as the calypso season enters its quarterfinal stages, tent officials seem confident that they have done their best.

The first quarter final will be held this evening at the National Cultural Centre (NCC) and the second this Sunday from 5:00 p.m. at the same venue. Eleven calypsonians will go before the judges in each quarterfinal. Following both quarterfinal rounds, nine calypsonians will advance to the final where they will face off defending calypso monarch, Walleigh.

Traditionally, the quarterfinal rounds for each of the six calypso tents produced a total of 18 semi finalists from which nine were chosen for the final. However, due to the limited number of calypsonians competing in this year’s tents, the semi final show had to be dropped.

The VOICE spoke to Cecil Charles, Communications Officer of the St. Lucia Association of Registered Tents (START), this week regarding concerns coming out of this year’s calypso season. Charles said that although the six calypso tents have come together under one umbrella this year, only 22 calypsonians are available for competition.

Charles said that while many artistes would give the assurance that they were ready for competition initially, it often turns out that many had not even scored their music. Rehearsals, he said, are contingent on artistes producing their music sheets. On many occasions, he said, bands are being paid for scheduled rehearsals with just a handful of calypsonians showing up for rehearsals.

Charles believes that despite the criticisms being levelled at START, the organization welcomes its critics to be part of the solution by joining hands with the calypso fraternity. Despite a lacklustre calypso season, he said that given the current environment, START has done its best to afford calypsonians and soca artistes the platform to showcase their talents.

“We are very satisfied that START has been able to do what it set out to do in terms of ensuring that there is a calypso season,” Charles said.

Charles said the pay-per-view aspect of this year’s calypso tent shows via Choice TV “has been doing very well”, although he admitted that START has not yet received figures on the viewership from Choice TV. He said it was possible that the reason why the crowd levels at the calypso shows dropped this year was due to people signing up to the pay-per-view package.

This year’s Calypso Monarch competition will be held on Saturday, July 18 at Beausejour Cricket Ground and will be executive-produced by the Carnival Planning & Management Committee (CPMA).

Financial woes continue to plague the calypso tents, too. Charles said that while sponsors continue to curb their financial commitments to START, service providers are often reluctant to reduce their costs. The odds, he said, are stacked against the calypso tents even further as gate receipts for this season have been less than favourable. For example, hosting the twelve calypso and soca shows planned for the season was estimated to cost START over $400,000.

According to tent officials, it costs roughly $30,000 to host a calypso show at the National Cultural Centre. Even with all seats filled, recovering that investment is difficult, especially since ticket prices fluctuate between $25 and $30. Charles said the absence of a government subsidy for the tents of late has been another burden, especially since many service providers increased their previous rates based on the calypso tents receiving a subvention.

“Basically, the tents still owe a lot of service providers and even our artistes who have been the pillars of the season,” Charles said. “We have not been able to reward them with the payments we said we would. We know that’s an outstanding debt and we acknowledge that.”

Meanwhile, preliminaries for the groovy and party soca competitions will be held on the National Cultural Centre grounds tomorrow afternoon. Twenty groovy soca and twenty party soca songs that were selected from the pool sent in previously will be performed by the artistes whose songs made it through to the preliminary rounds.