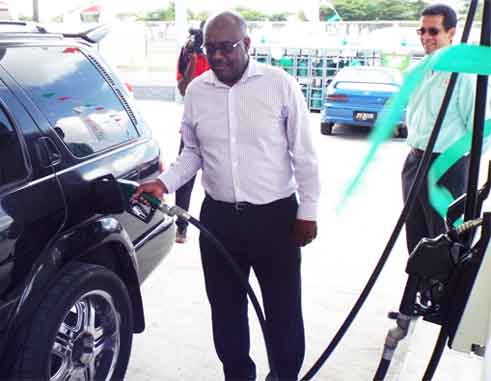 THE competition between the petroleum retailers in St. Lucia has just become narrower as RUBIS West Indies Ltd has opened another station on island.

The company has teamed up with local petroleum retail giants Jn Marie and Sons Ltd. who have been operating for over three decades, for the official opening of the newly rebranded service station which is located at the corner of L’Anse Road and the John Compton Highway.

CEO of the company, Mauricio Nicholls said: “We are very glad to be able to give the consumers in St. Lucia yet another location where they can purchase all of their lubricants and fuel needs. We know that most of our customers are loyal to one site but it just happens that sometimes they are driving and they may be running low on fuel so when that happens, they may go to another site to buy their fuel. So the bigger the network that we have, the more convenient we make it for that consumer to buy their fuel needs at our RUBIS branded sites”.

Nicholls said that St. Lucia has the largest number of RUBIS stations in the Eastern Caribbean with 16 stations. However, this number is due to increase in the near future.

“We are continuing to develop the marina business in St. Lucia and we have entered into an agreement with the owners and shareholders of the marina to be supplied by RUBIS and we will soon commence construction of the facilities of the Capella Marina to install new equipment and state of the art facilities. Hopefully within a short period of maybe 10-12 weeks we will be up and running and selling RUBIS branded fuel at the marina, so we are very proud.”

Retailer of the new service station, EveristusJn Marie called the occasion a watershed moment in the history of the company’s 37 years in business.

The decision to partner with RUBIS, he said, was the firstmajor decision made for the company since the passing of his father, Raphael Jn. Marie who is also the founder of Jn Marie Ltd. .

Jn Marie said: “As a company, we are always seeking s ays to do things differently and better to keep ahead in the business. Our recent change is part of that philosophy. In our quest to be better, we have found a forward thinking partner in RUBIS”.

The petroleum retailer said his father would have been pleased with the decision made for the site.

Following the speeches was the official cutting of the ribbons and the fuelling of the very first customer vehicle.

RUBIS, a French based establishment was founded in 1990 and specialises in the down stream petroleum and chemicals sector, operating in bulk liquid storage facilities.

In 2011, RUBIS acquired the Texaco’s assets owned and operated by Chevron in the Eastern Caribbean, making them a formidable competitor in the regional downstream petroleum market.