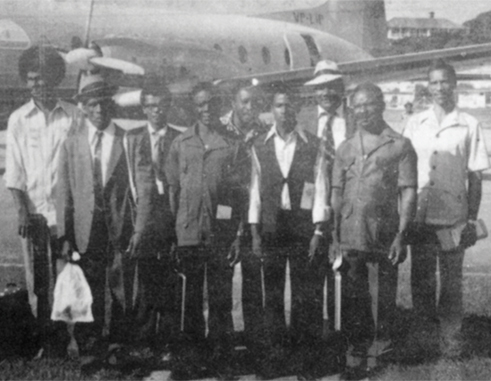 CALIXTE George, in delivering his wide ranging eulogy at Hilford Deterville’s funeral – some called it a warning to politicians. From him I got the idea to begin a series of articles recapturing the ideas of the St. Lucia Forum of which Calixte and Detervillewere part. This article attempts to capture the many discussions which the group held over a long period which formed the basis of my mandate as Minister for Agriculture, Lands, Fisheries and Forestry in the Government of Saint Lucia. Agriculture was then the bedrock of the economy and tourism still in its infancy. The Forum viewed agriculture as a means of sustaining economic growth and keeping more of the tourist dollar home whilst providing employment for the rural folk.

Later, after I had taken my exit from politics and wrote ‘Shattered Dreams’ a narrative about my involvement in politics between 1974 and 2002, I omitted to dedicate a chapter to what I considered at the time the Forum’s entire plan for the island’s development. The idea was to first transform the banana monopoly into a more scientific land use system which was to eventuate in a more diversified, sustainable and solid agriculture business foundation. The long term vision was to transform the rural peasant, who had taken up banana cultivation, into a more rounded, independent farming entrepreneur. Crop diversification and the rearing of ruminants and small stock were planned to contribute to whole system of agriculture diversification thereby creating a new man from the tattered peasantry which colonialism had bequeathed our island. Such an inclusion would have made ‘Shattered Dreams’ too lengthy.

For those who wish to peruse the programme of work which my Ministry of Agriculture envisioned, I refer them to a twenty-eight page booklet entitled ‘Incentives for Agriculture’ which was prepared by that ministry and printed by the Lithographic Press of St. Lucia. The main thrust of this booklet was to list and define the services and incentives which were available to farmers under the Agriculture portfolio, 1979-1982. An important aspect of the new thrust was the rewarding of farmers for excellence. It was refreshing to note that the idea of incentives was later taken up by some banks and certain private businesses on the island.

Under my charge the more progressive farmers were sent on overseas trips so as to broaden their vision and education. The purpose of such incentives was to create better, more efficient farmers and new business persons. Farmers were chosen strictly on their determination and ability to work hard and to follow proper scientific methods on their farms. In the booklet there is a picture of a group of farmers who are about to board an aircraft to Trinidad, the seat of the faculty of Agriculture of the University of the West Indies. Caribbean farmers, including our own, can learn new skills and techniques from properly organized field trips to UWI and Trinidad. My ministry was also influential in arranging field trips to Martinique and later I accompanied twelve banana farmers to London to study banana fruit-quality-selection processes and sale at supermarkets there.

A closer look at the pictures of those farmers who went on field trips during my tenure of office would reveal the political neutrality of the selection. There was no discrimination along party political lines. There were also incentives for crop production. Some readers may recall the invitation to the Saint Lucia housewife to save avocado seeds for propagation at the Ministry’s various propagation stations island-wide. These avocado planting materials were then sold to farmers at concessionary rates in order to incentivize them to grow avocadoes among their other permanent crops such as citrus (oranges and grapefruit) and mangoes. A land use map was drawn up for the guidance of field staff of the Ministry of Agriculture and for farmers too.

It was expected that diversification would have proceeded without disruption to the thriving banana industry. There were also incentives for soil conservation and proper drainage and contouring of hill sides to facilitate safe run-off rain water. Rental of small farm machinery was encouraged as soil preparation is crucial to proper rooting and rapid plant growth. Of course larger machinery (D4 and D6 Caterpillars) were available for clearing new lands for farming.

As I perused the pages of this little incentives booklet it reminded me how difficult the work of development really is. Few people (including politicians) are willing to invest in agriculture. There are often severe challenges whilst financial benefits often take a long time. Yet no aspect of a country’s development is more important than its ability to feed itself. Those who have thought analytically about the need for safe food and clean drinking water will concur. The future for people who are unable to feed themselves is too often bleak. Take a closer look at countries around the world and see how many are on the brink of starvation from their inability to produce sufficient food for their growing populations.

A question which deserves serious discussion here is how long can Saint Lucia survive without food importation? Why do we continue to live as we did before independence when we were a mere colony? Why have we tolerated a new culture in which farmers and workers spend only four or five hours each working day on the job? Why. Why, why? Who is there among us determined enough to come forward and change this state of affairs? Who will tell the youth that there is no other road to wealth and prosperity than through hard work and persistent effort over a long period? Who will make ‘independence’ mean what it says?

As a special gift this 36th anniversary of independence, I wish to restate the St. Lucia Forum proposition that caring and patriotic politicians are duty bound to energize farmers, fishermen and workers of this land to greater effort, productivity and income. Timely, correct and adequate incentives to help agriculture pursuits are crucial to sustainable food production. This island’s future is still to be properly based on farming even as tourism shows signs of increasing value to national income. Still, we ought not to slavishly export hard earnings from tourism on foods which can be produced locally.

This year (2015) we ought to focus on more efficient agriculture production and output including in-land fishing and flower cultivation as we reclaim denuded forest lands. To this end we need to re-visit the agriculture vision of the St. Lucia Forum forty years or so ago and place this vision squarely within the efforts of the Republic of China (R.O.C.), Taiwan in its agriculture thrust for Saint Lucia. Perhaps a special article will be devoted to the efforts of the R.O.C. (Taiwan) in helping local agriculture.