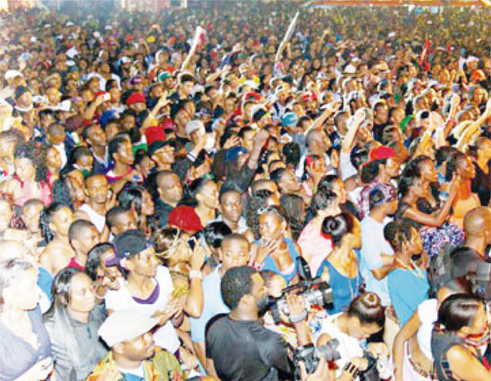 AS we approach the 36th anniversary of our independence, I am forced to contemplate on the attitude and mindset that make a nation truly independent. In an appeal to my people’s intelligence rather than their emotions I ask in earnest: Is the nation at its prime at 36? Do we have a perspective and an understanding of our own problems in the context of the larger world of which we form a small part? What does independence mean and what has it brought us?

It is possible that our independence anniversary is one of the most overlooked days on the calendar simply because we haven’t used that occasion to engage in vertical (problem-solving) discourse instead of the customary horizontal conversations that permeate the national airwaves around this time. This year for a change, let’s have some serious discussions about the events and attitudes that have shaped the nation over the last 36 years. Critically, we should begin to view national independence as a mindset rather than an event to be celebrated out of a sense of routine obligation.

We came through the middle passage from Africa to a slave society. Under slavery and colonial subjugation, our people suffered unspeakable “mind” damage. At the onset of independence in 1979, we were supposed to have committed ourselves to the future by gaining new knowledge, insights, ideas and paradigms. At the time of the ushering in of this new era of self-government, the mood was hopeful everywhere as people were inspired by the vision of a new society free of European control. Culturally and politically, however, the legacy of European dominance remained evident in the political infrastructure and education system in our island. Although national independence initially produced moments of inspiration and promise, it has hitherto failed to effectively transform the island to bring about true autonomy, development and economic prosperity. Independence was a chance to stand on our own two feet and eventually rely on our own resources. It was a time to not only “find a way” but also “make a way”. It should have taught the people, what one French writer in the eighteenth century saw as the greatest danger, that they have a mind.

But the wings of independence came with a body of responsibility. If an independent nation is to responsibly develop its human, natural and structural resources, it needs to erect the four golden pillars of sovereign strength namely; strong and reliable institutions, an education system which fosters innovation and creativity, a progressive culture of excellence and dedicated civic participation. Most importantly, an efficient and progressive mindset serves as the sturdy concrete footing that keeps the pillars from toppling.

Alas, attaining economic independence proved harder than gaining political independence. Safe in the knowledge that independence does not necessarily mean freedom and self sufficiency, we are at the mercy of the goodwill of the global capitalistic system and its institutional underpinnings. High debt, fiscal deficit, weak economic growth, lack of institutional frameworks and low foreign exchange reserves suggest anything but economic self-determination. Besides, we love everything foreign. Ironically almost everything is imported here after almost four decades of independence. Our food import bill is amongst the highest in the Caribbean and we have failed to recognize the linkage opportunities that exist between agriculture and tourism in creating meaningful employment for our people. Half-hearted attempts to create a strong manufacturing sector a long time ago failed in the main. We say that we are a free nation but our behaviour suggests that we are still not free and depend almost slavishly on foreign aid and the largesse of developed nations. We take pride in the culture of others, but not in our own. Since independence, there has been a steady migration of people from the island to North America and Europe, looking for a “better” and “more stable” quality of life. We don’t think independently, we often think what others make us think. Even the intervention of western economic institutions like the IMF and the World Bank have questioned the true nature of our sovereignty not only in St. Lucia but in the wider Caribbean. Furthermore, the colonial education system and governance structures which we inherited are constant reminders of our historical entrapment, and subsequent failure at true self-determination. It’s high time that each and every citizen of our nation realises their responsibilities and work towards the construction of a self-sustaining nation with least dependence on foreign culture, power and influence.

A flexible and needs-focussed education system is a necessary step towards an independent St. Lucia. This would entail a nation where people are literate, have jobs, where through the medium of education they can rise up in the hierarchy and live a respectable life. The fact that our country has produced two Nobel Prize winners is really no measure of our educational virility. Most would argue that had Derek Walcott and Sir Arthur Lewis remained in St. Lucia, they wouldn’t have had a quarter of the educational and economic opportunities that they received overseas. Despite the gains that we have made in terms of building secondary and tertiary educational institutions on the island, there is still an incredible amount of work to be done in the areas of funding, governance, curriculum standards and assessment and testing. The sad reality is that in this day and age, we still don’t have our own university and research centres to allow us to become organic value providers and internationally competitive institutions. There has been a failure to “fully” serve the interests of the people through brave and innovative development programmes.

On the other hand, the truth is most people are more interested in entertainment than they are in real education. Usually the answer I get is that they don’t like to read. It’s not uncommon for an ‘educated’ adult to say he or she hasn’t read a serious book after leaving college or university. This simply means that they have remained imprisoned by old ideas, beliefs and perspectives learned all those many years ago. Meanwhile voters from the lower strata of society often lack the educational background to understand the increasing complexity of many social and political issues, and hence are not emancipated enough to make wise decisions and choices for the betterment of their communities, towns and country.

As Marcus Garvey observed decades ago: “We are going to emancipate ourselves from mental slavery because whilst others might free the body, none but ourselves can free the mind. Mind is your only ruler, sovereign. The man who is not able to develop and use his mind is bound to be the slave of the other man who uses his mind; use your intelligence to work out the real things of life. The time you waste in levity, in non-essentials, if you use it properly you will be able to guarantee to your posterity a condition better than you inherited from your forefathers.”

It seems like society as we knew it is officially over and the sharp-elbowed capitalists amongst us will continue employing their divide-and-rule tactics. While we engage daily in meaningless political chatter, our society has disintegrated into a hinderland of political tribalism. Ours is a deeply fractured nation obsessed with individualism and consumerism, and bent on its own self-destruction. Moreover, the distance between the top and the bottom of society is growing and is beginning to unravel at the fringes. A process of social estrangement has set in, and no one knows where it will lead. AmartyaSen, an Indian economist and philosopher, described that process as “plural monoculturalism” where social and political groups live side by side but do not touch.

With the passage of time, our country seems to be losing itself in a hellish labyrinth of economic inequality, social depravity and youth recalcitrance. Just look around and you will notice plenty of social dynamite piling up in ghettos around the country. With the escalating social chaos and anger, our society has become a shadow of its former self. Indeed, we should stop kidding ourselves that we are still a civil society modelled on the concept of public participation, free thinking and social courtesy.

As we reflect and seek to improve our communities, it’s essential to remember that building and strengthening social organizations is the key to helping foster social belonging and structure social life in our country. Gone are the days when vibrant clubs and effective institutions conducted meaningful social projects and engaged the youth and the wider society. The corollary is that countries with greater organizational and institutional strength remain stable in times of social change, and do better over time. Today, the civil foundations of St. Lucia are eroding especially in terms of the family unit and community organizations. As the independent authority of our institutions wither away, our country is threatened by the ready and unruffled acquiescence of our people.

A new strain of civic influenza is taking hold where towns and villages are viewed as a collection of rugged individualists; navel-gazers who would rather invest their time in projects that promise direct benefits for them and their families rather than the common good. As regards social re-engineering, we hear questions everywhere and answers nowhere, at least none with even the hint of offering something new. For, somewhere along the line, St. Lucian society has strayed off course, ambling along aimlessly.

Wealth inequality has not only persisted, but also grown much larger over time. The cost of living for many St. Lucians is unbearable; the price of everything seems to be on an upward trajectory. Further compounding the problem is the fact that successive governments have stood by and allowed real estate St. Lucia to be sold to the highest foreign bidder. Land and other resources have become too expensive because foreigners with greater purchasing power have caused the price of everything from rent to food to skyrocket. Huge tracts of the best residential and agricultural land in some parts of the island have been gobbled up by wealthy foreigners, resulting in the local population being priced out of the property market. What is more, preserving public access to beaches is a constant struggle. For all the aforementioned reasons, we need to give our independence a more profound meaning through greater democratization, collective initiative and civic oversight.

On the occasion of our 36th independence anniversary, St. Lucians both here and abroad are called on to pay their citizenship dues in full and come forward and break all the shackles to make this country truly free. Since the welfare of any independent and progressive nation is built on education, culture and knowledge, let’s continue to emancipate ourselves from mental slavery as Bob Marley admonished. After 36 years of independence, I believe we have still not come of age and really can’t blame it all on colonialism. We have had an equal contribution. For comments, write to Clementwulf@hotmail.com – Clement Wulf-Soulage is a Former University lecturer, Business Economist and Author.