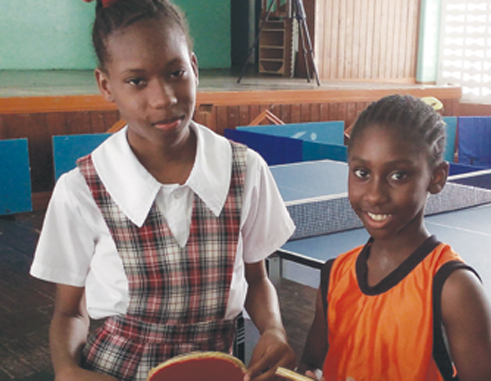 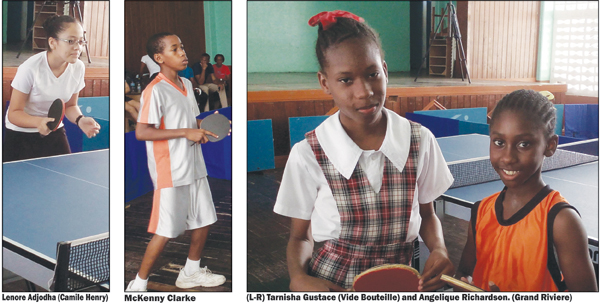 THE curtains have come down on what can best be described as an exciting Inter Primary Table Tennis Championship. The competition took the format of boys and girls open singles with round robin matches being played in the group stage followed by single elimination matches.

All competitors represented the schools to the best of their ability at the Beausejour Indoor Facility to earn the right to qualify for the quarter finals.

According to national table tennis player and one of the organizers for the championship Chris Well,s the preliminary rounds saw 28 groups of boys and 14 groups of girls doing battle with only the group winners advancing to the second round for the boys and the top two finishers advanced for the girls.

The girlssemi finals Ave Maria’s ZoyaJn Marie won in straight sets over TarnishaGustave from the Vide Bouteille Primary to advance to the finals. Ave Maria’s – Zarianne Anthony won a tightly contested match against Lenore Adjodha from the Camille Henry Memorial to secure her spot in the finals. The third place play-off witnessed Lenore Adjodha dominating Tarnisha in straight sets to secure her podium spot.

In the boys semi finals all three competitors from Tapion did battle. Jared Desir won the first match over school mate Jason Hunte 2 sets to 1 despite a spirited comeback attempt by Hunte. The other Tapion student Jordan Hunte won again in straight sets over Camille Henry’s Mc Kenny Clarke. The boys third place match was won by Mc Kenny Clarke of Camille Henry Memorial over Jason Hunte in straight sets.

The all Tapion school finals for the boys saw Jordan Hunte winning in straight sets over Jared Desir 11-4,11-5 and 11-4 to become the 2015 Primary Schools Boys Champion.

It was an all Ave Maria school final for the girls that went down to the wire. Zarianne Anthony quickly won the first two sets with her consistent and patient play 11-8 and 11-5. ZoyaJn.Marie then composed herself playing consistent strokes with occasional quick attacking shots and won the next two game 11-6 and 11-8. The deciding set saw both players giving it their all fighting through the pressure of the game.

Zarianne got off to an early lead then Zoya won a series of points and had match point at 10-8. Zarianne then fought to level the game at 10-10. At that point it was clear that both players were under tremendous pressure. Zarianne was focused on keeping the ball on the table which forced Zoya to make two unforced errors which was enough to crown Zarianne Anthony as the 2015 Primary Schools Female Champion.