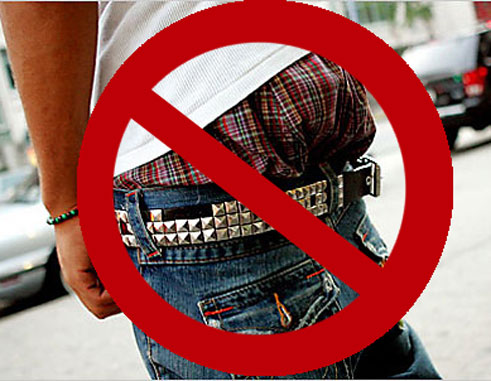 CONVICTS prohibited from wearing belts often wore sagging prison-issued uniforms, and they carried that look with them once they were back on the outside. Another story goes that some prisoners would wear their pants low to let other inmates know they were sexually available.

Both versions are distasteful yet this is the trend several young men are attracted to, never mind whatever they are hearing about the origin of the sagging pants, they believe that it is cool to look that way. Wake up call– it isn’t sexy. It just makes grown men look like they’re wearing a badly saturated diaper.

The sagging pants are not the symbol of machoism or merely style those young men wearing their trousers below their butt may perceive it to be. Its very history is much less honourable than many may have ever cared to appreciate. Further to that is the senseless and disrespectful attempt for some of them to try to bring about an acceptance of this mode of attire into the mainstream, even at formal functions is shocking and annoying.

It is at this juncture that Abetta Country has a difficulty. The way that many persons choose to glorify and celebrate whatever they like to wear is one thing but why try to force-feed these individual tastes into the mainstream even when it is deemed not to be inappropriate on the same basis and human right that was invoked to make one’s personal decisions? If one decides to go in a certain direction with their appearance, while rejecting mainstream values, they should do so bearing in mind that not everyone thinks that way and the common ground here is respect and compromise not imposition.

Even in the great so called liberal United States, many cities have been clamping down on droopy pants and the exposure of underwear or bare skin. In Tennessee anyone found with their pants three inches below the top of their hips are fined. Quite apart from public indecency, city officials cited public health concerns and even the improper gait that comes with wearing sagging pants.

Hampton and Florida have also cracked down on the exposure of undergarments under sagging pants or skirts. Many other cities are considering amendments to ban the sagging saga. Hey, Saint Lucia government the country needs money to deal with our fiscal situation. Many would support a “pull up or pay up” fine if that’s what it takes to help restore the decency back in Public Decency.

It is not surprising when such positions are met with stiff opposition and unsightly boxers will continue to be on parade. However this is an outrage and the society has every right to challenge people walking about with their undies exposed. If that’s okay; then what’s next?