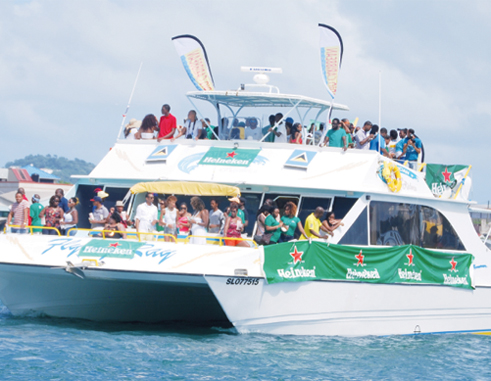 With a wind gust of about 17 knots, the day promised to be one of fun and excitement as a number registered boats of all different shapes and sizes with a combined total of about 450 participants including some of the island’s junior sailors competing in next weekend’s Mango Bowl Regatta all headed to the north of the island.

The flotilla heard the starting horn coming from “Lucky Strike” with St. Lucia’s Minister for Tourism Lorne Theophilus, Tourist Board Director, Louis Lewis and a number of tourism personalities on board leading the way from the Castries Harbour.

A further 2700 nautical miles away weather conditions were not the same as “Fair Helen as strong winds delayed the official start in Las Palmas on Sunday morning of the main event. This is the third time in the ARC history that the start has been delayed due to predicted high winds. The previous years been – (1989 and 2012). With such a delay, one can anticipate the first yacht across the finish line in Rodney Bay sometime on Sunday December 7.

Speaking to the media was Theophilus and Lewis, The two individuals shared similar sentiments about the turn out for the event, they said that by St. Lucians and visitors alike was tremendous and that augureds well for the Flotilla. They also went on to thank the participants for making this year’s Flotilla a success,

The ARC Programme of activities will shift into gear in the coming days in Rodney Bay, while the curtains will come down on two weeks of celebration on Saturday December 20 with the prize giving ceremony.