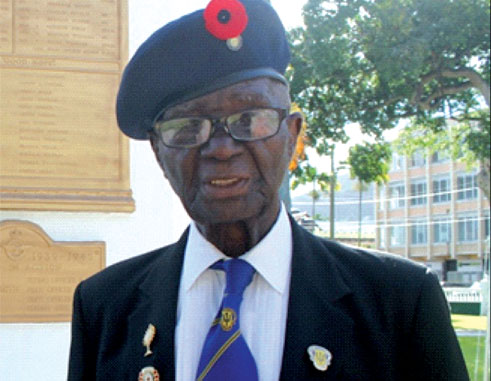 NINETY-three-year-old Maynard Hill resident, Haynes Cyril, has seen his fair share of battle. The Soufriere native was among the many Saint Lucians who served in World War II as part of the Commonwealth’s response to Germany’s threat to world peace. Close to seventy years since returning to Saint Lucia after serving in that war, Cyril says Saint Lucians should not take for granted the freedoms they now enjoy.

Cyril said he and other servicemen and servicewomen trained in Norfolk, Virginia before moving on to Europe for active service. When they reached the Atlantic Ocean, they joined a heavy convoy that was provided for the Allied Nations. That was when they came under fire.

“German submarines started bombing our troops’ ships and so on,” Cyril told The VOICE. “My ship was fortunate. We went through Gibraltar and into the Mediterranean Sea. We were actually supposed to land in Algiers but our destination was changed. So we went up to Italy, landing in Naples.”

Cyril said they camped near Mount Vesuvius, a volcanic area not unlike Saint Lucia. But no sooner did they take cover and try to dig holes to protect themselves than did the Germans start bombing the same place where they landed. However, they had no casualties and stayed in Italy for some time while awaiting further notice.

“We were supposed to go into action with the Welsh regiment as a back-up support for the advance troops’ invasion of Germany,” the war veteran explained. “But the advance troops had too much for them (the Germans), so we had to stand down. From Italy we escorted 4,000 German prisoners to Egypt. That’s where we were on standby for the war in Japan. Fortunately, the Americans dropped that bomb in Hiroshima and that is what caused me to be alive, I believe, for the time being. However, we stayed in Egypt and then after the war I returned home to Saint Lucia in January, 1946.”

The VOICE spoke to Cyril last Sunday in Derek Walcott Square as he and other veterans and other concerned interest were about to pay tribute to the men and women who lost their lives in both world wars. Remembrance Day, he said, is a day he always looks forward to. Cyril, who serves as President of the Saint Lucia Ex-Service League, said Saint Lucians need to preserve the freedoms they have come to cherish.

“That’s why we have our freedoms here. If not (for our efforts), we would not have had the freedoms that we now possess. So I encourage all Saint Lucians to try to protect their country and live well to defend the nation’s generations to come,” Cyril said.

Over the years, there has been much debate regarding Saint Lucia’s involvement in the war effort. Known for its peace-loving nature, many people argue that Saint Lucia – then a British colony — was used as a pawn to fight Britain’s battles on the international front. Not so, says Cyril, who recounted an infamous incident said to have transpired in Saint Lucia in the early 1940s.

“As Saint Lucians, we had a right to be in that war. If you recall, we were not at war in 1942 when the German submarines came here and torpedoed two ships in our harbour, killing so many people here in Saint Lucia. So that was one of the reasons why we had to defend ourselves as a Caribbean. That’s why we formed the Caribbean Regiment.”

Cyril, who has been decorated with medals many times over for his service to country, says that while veterans like him would have done their bit to make the world a much safer place to live in, the present and future generations of young men especially need to turn away from causing harm to people and country. If any real progress is to be made, he said, a collective effort must be made.

“I’m advising the young men to brace themselves and not to be discouraged. The way is open. We have paved the way and I believe that the government is trying their best to see what they can do. We know we’re not a rich nation. But we need to maintain ourselves and stop this state of crimes and other things like that. That’s the only way we’ll have respect for Saint Lucians and Saint Lucia,” Cyril said.

According to records, 15 Saint Lucians were killed in action in World War II, while 9 died on active service.