One motorbike rider is feared dead after an accident near Top of the World, Marisule. 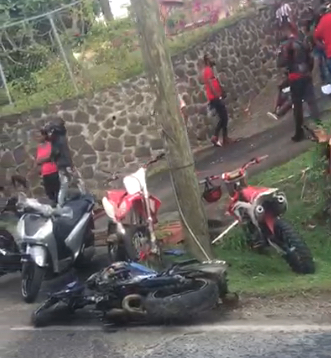 What was supposed to be a Sunday afternoon of riding with a group of riders ended in tragedy as scores of riders halted their ride to attend to one of their own who lay motionless on the sidewalk after an apparent collision.

Photos and videos of the accident that took place on Sunday afternoon quickly made rounds on social media sites and messaging platforms, with individuals pointing out the rider’s inappropriate attire.

Emergency respondents were on the scene and the injured rider was conveyed to the hospital via ambulance.

For a brief period, motorists had to detour through to Union as police had to cordon off the area.