Apart from the youngsters being trained in the basics of football, they are also taught personal deportment and ‘soft skills’ acquisition.

As the programme coordinator for the youth program, John has collaborated with the Ti Rocher Football Club (TFC) to roll out an exercise regime and regular sessions that keep the youngsters fully involved and committed to the venture.

“We set out objectives for each day. I have 15 coaches that I separate into different age groups and try our best to sell the game to the kids, from the grassroots level. We try and sell it to the younger ones, and with the more advanced players we go into basic techniques,” he said.

John said the coaches have been supportive of the program and volunteer their time to undertake the exercise.

“The coaches are interested in this program, and though they are not fully qualified as yet …they have the knowledge,” he added.

The young participants come from Ti Rocher, Desruisseaux and Micoud.

John is a barber by profession and owner of the ‘Superb Cuts’ barber shop, which has been influential in sustaining a ‘Haircut Program’ for the youngsters as well.

“The haircut program is an initiative undertaken by the SLFA (St Lucia Football Association) to give back to the kids,” John explained.

He says that with input from the SLFA president, Lyndon Cooper, the haircut initiative  which has gone on for the past three years, will continue. 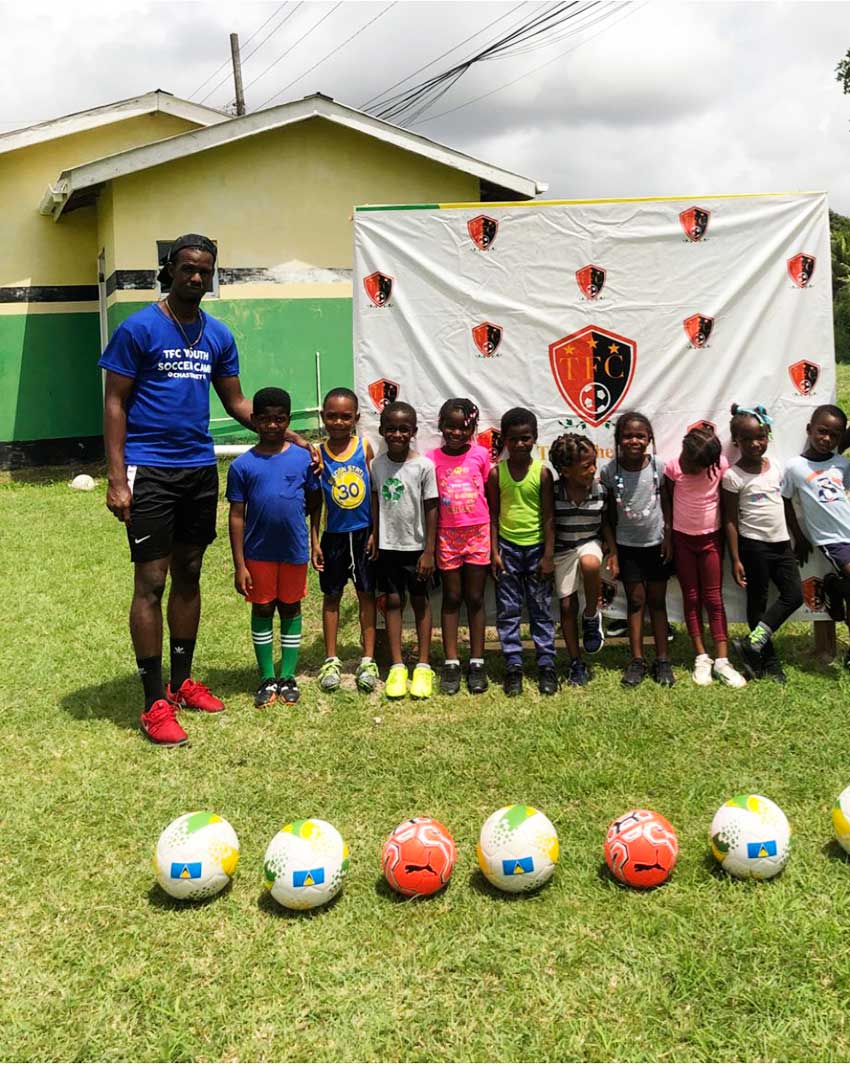 John said that the haircutting process takes an average of about three days to cater to a maximum of about 60 youngsters.

Appointments are arranged in a format to undertake the exercise, with assistance from one or two other barbers from the community.

John said the parents have been very supportive of the programme “and they love it and they really appreciate it …but because of COVID we may have to push it back.”

He adds, “We do this exercise yearly …and every time we have the summer camp, we do this after the sessions are done.”

Superb Cuts is a big supporter of activities that cater for youth development in the community. “This is our main priority …youth development. For me personally, I grew up without that foundation and my focus now is to set up a foundation for the kids, so that when they grow up they can pass it on to their younger peers,” John declared.

“My business has been involved in youth development, even before it was registered,” he added. “I started cutting hair at my home for $5 and I use to take that money and buy balls to organize playing sessions for the youth in my community.”

John recalls that during his years as a national player, and travelling back and forth to represent the country; he maintained his profession as a barber and “I would cut hair from the manager to the players on the team, as they all liked the way that I worked.”

John feels that the ‘haircut vibe’ helps instill a certain sense of “self confidence” in an individual.  Professional players, he said, are now caught in the ‘trendy haircut’ styles and “it’s like in your normal life, you have to stay clean and looking sharp.”

The Ti Rocher community activist has taken on an added role of “teaching young people how to cut hair.”

He noted: “My journey was not easy. I realize that it’s something that God has given to me and so, I try my best to give back in every way that I can.”

TFC President Lee Willie endorses the program and credits the input of John, one of their senior players to help establish a structure for the club through “the need to assist the children.”

The two teammates set out to broaden the structure and in the process, Willie assumed the role of TFC presidency.

“Year after year we have decided basically that there’s growth in the program …and over the past five years, the venture has been formally implemented,” said Willie.

The youth program caters for a total of about 80 youngsters, ages ranging from four to 17 years. Sessions are held at the Beauchamps playing field, in the community.

“We don’t only make the program about football, we have social workers and we have indoor sessions, where motivational speakers reach out to the kids,” John explained.