In the framework of World Suicide Prevention Day, which takes place on September 10 each year, the Pan American Health Organization (PAHO) warns that the COVID-19 pandemic has exacerbated the risk factors associated with suicidal behaviours and calls for prioritizing its prevention. 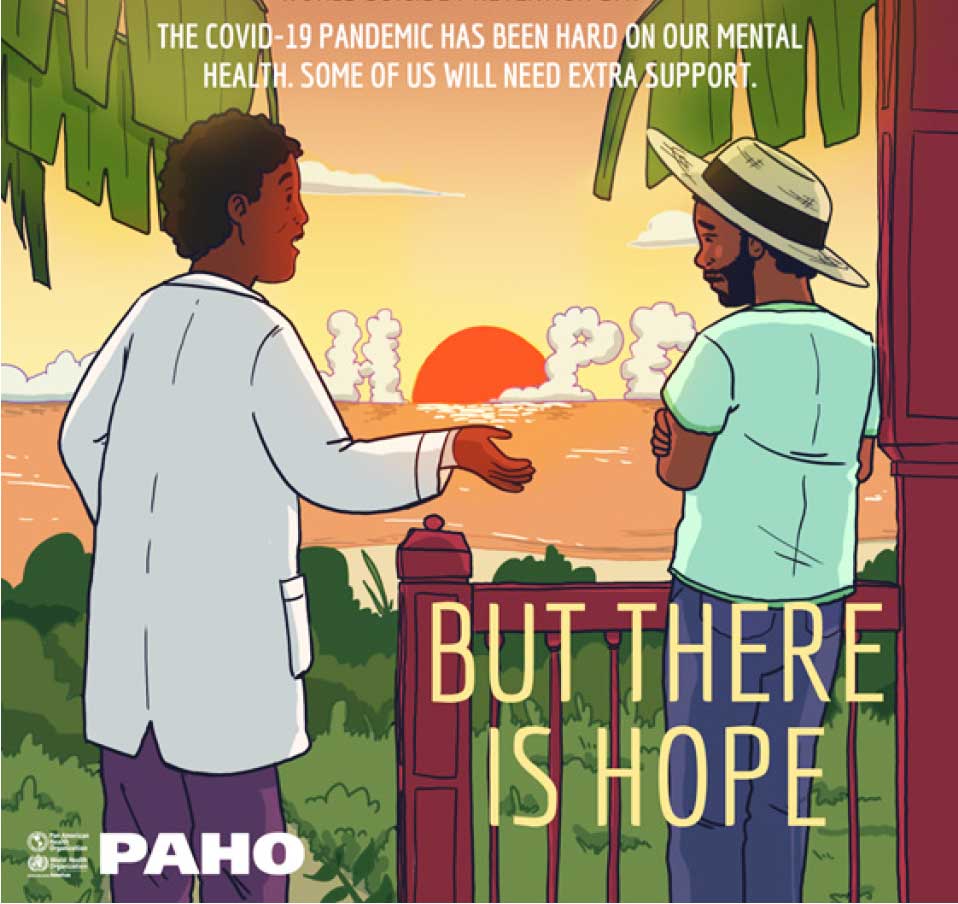 Studies have shown that the pandemic has amplified risk factors associated with suicide, such as job or economic loss, trauma or abuse, mental health disorders, and barriers to accessing health care. Around 50% of people who participated in a World Economic Forum survey in Chile, Brazil, Peru and Canada one year after the start of the pandemic, reported that their mental health had declined.

“Suicide is an urgent public health problem and its prevention must be a national priority,” said Renato Oliveira e Souza, head of the Mental Health Unit at PAHO. “We need concrete action from all elements of society to put an end to these deaths, and for governments to create and invest in a comprehensive national strategy to improve suicide prevention and care,” he added.

Suicide remains one of the leading causes of death in the world, according to the World Health Organization (WHO), accounting for one in every 100 deaths. Each year, more people die from suicide than from HIV, malaria or breast cancer, or from war and homicide. Suicide is also the fourth leading cause of death worldwide among young people aged between 15 to 29, after road traffic accidents, tuberculosis and interpersonal violence.

According to WHO’s World Health Statistics 2019, 97,339 people died by suicide in the Americas in 2019 and it is estimated that suicide attempts may have been 20 times that number. Males accounted for around 77% of all deaths from suicide and, although progress has been made in the development of evidence-based interventions in suicide prevention, many countries continue to have increasing rates.

“Losing a loved one to suicide is heartbreaking and preventable,” said Oliveira e Souza. WHO’s recent LIVE LIFE guidance aims to support national efforts and help the world reach the goal of reducing the global suicide rate by one-third by 2030.

Key proven suicide prevention measures include limiting access to means of suicide (such as pesticides and firearms), early identification, assessment, management and follow-up of people affected by suicidal thoughts and behaviours, fostering adolescent social-emotional skills, and educating the media in responsible reporting on suicide.

“Creating Hope through Action” is the theme of this year’s World Suicide Prevention Day, organized by the International Association for Suicide Prevention (IASP) and endorsed by WHO, with the overall goal of raising awareness of suicide prevention worldwide.

Most suicides are preceded by verbal or behavioural warning signs such as talking about wanting to die, feeling great guilt or shame, or feeling a burden on others. Other signs are feeling empty, hopeless, trapped, or with no reason to live; feeling extremely sad, anxious, agitated, or full of anger; or with unbearable pain, whether emotional or physical.

Behavioural changes such as making a plan or researching ways to die; staying away from friends, saying goodbye, giving away important items or making a will; doing very risky things like driving at extreme speed; showing extreme mood swings; eating or sleeping too much or too little; using drugs or alcohol more often can also be warning signs of suicide.

Effective interventions to prevent suicide are available. On a personal level, early detection and treatment of depression and alcohol use disorders are critical to suicide prevention, as well as follow-up contact with those who have tried suicide and psychosocial support in communities. If a person detects warning signs of suicide themselves or in someone they know, they should seek help from a health care professional as soon as possible.