IN 2018 when Hayden Forde published his collection of plays Silent scars and other plays, I noted that “his plays present the raw, tough, pain-filled lives of inner-city Saint Lucians. He does not sugarcoat the dramas, the language, the daily reality of these citizens.” I added that Forde’s plays “keep before us necessary reminders of the complexity of the lives of those we so easily profile, dismiss and take for granted.”

In a review of his Carifesta 2019 production of Silent Scars in Trinidad, I had observed that “Forde’s plays capture a social realism that is honest, no-holds-barred, a Caribbean August Wilson-portrayal that searches the nitty – gritty lives of urban characters in our island nations.”

Poet and playwright Kendel Hippolyte, writing in the Foreword to Forde’s plays, had remarked that “for more than nearly three decades…Forde has been engaging the society in conversations about class relations, socio-political power, the role of the artist in helping to question and change the status quo and related issues. In his work, there are also explorations of personal relationships – lovers, parent-and-offspring, friendships.”

Forde’s new play Gimme a chance was produced for Independence 2021 by the Cultural Development Foundation. Given the year-long pandemic situation, it was filmed as a television play by Calabash TV which has been doing outstanding work in the area of arts and cultural productions for television. Silent Scars had also been filmed for television and the excellent acting of that gripping story made for a powerful on-screen drama. Given all that is happening these days, and the necessity of using virtual broadcasting for many activities, this is probably an opportunity for others to follow the example of Calabash TV and the CDF in producing even more drama and other artistic events in the performing, visual and literary arts. A huge audience at home and abroad is waiting for quality arts programming on television and computer screens.

Gimme a chance is a typical Forde play. It is strong social realism, presenting lower middle-class, social-climbing personalities alongside those who live in depressed urban ghettos, a family struggling to hold itself together, the growing pains of young adults, a certain nitty-gritty actuality that is familiar to the average town dweller. In this particular drama, against the middle- class aspirations of the father Marcus, played by veteran Joachim Clauzel, the frustrations of the mother Gloria (Miranda Austin), Forde brings to the front the desires of the daughter Ruby (Lenni Alcindor) and her boyfriend Tony (Shilton Leslie) to make a life and living for themselves in the arts. Marcus the accountant, aware of his rise from poverty to his present position, opposes Ruby’s ambition as well as her relationship with Tony who comes from the less attractive side of town. Gloria is caught between her love for Marcus and her concerns for their daughter, as well as her own loneliness in a marriage where her husband is a workaholic. 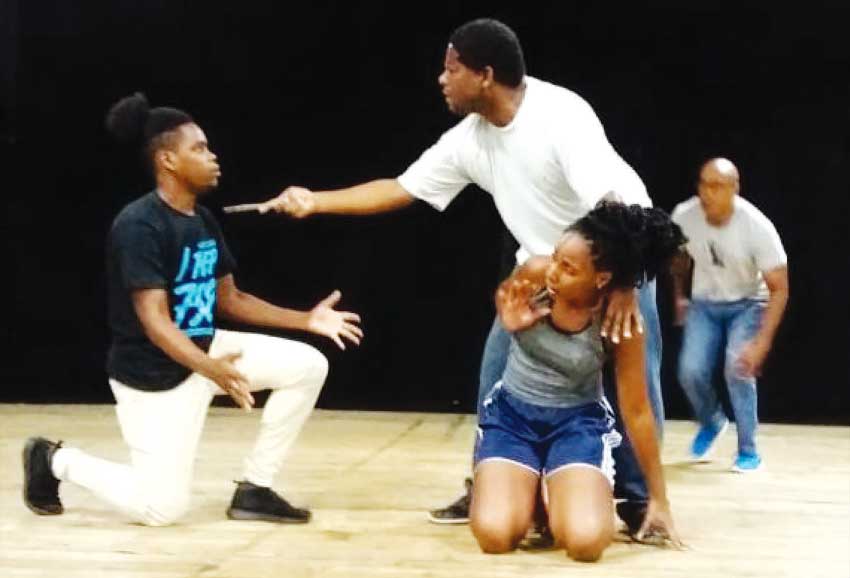 Tony and Ruby, faced by her parents’ disapproval of their relationship, not sure how to resolve the challenges, are taking out their frustrations on each other. Their two friends Aboy (Anthony Martin) and Alice (Christa Emmanuel) provide glimpses of the wider social world in which they all live with its economic and personal issues. Earl Agdoma, as the vagrant Snatch, plays a pivotal role near the end of the play which helps to a certain settling and resolution of the issues.

I thought the television production worked generally well though stage management had to depend on some video images as background which weakened the overall stage décor. The stage-set details of furniture could have been more carefully planned and arranged, especially since they were under the all-seeing eye of television cameras. The ensemble acting was very good. Miranda Austin is our most experienced actress now and captures the role of mother balancing all the issues in her family very well. Joachim Clauzel (making a welcome return to stage) also convinced with his portrayal of Marcus the father struggling to hold on to his middle-class aspirations. Lenni Alcindor, Christa Emmanuel and Shirlton Leslie seem to be relative new- comers, and carried their performances professionally. Emmanuel’s Alice was a convincing supporting role and perhaps Alice could become a main character in a future Forde play. In her we got glimpses of another kind of social survival. Anthony Martin is one of Forde’s regular actors and shows his developing stage experience in how he shaped his character with understanding.

I thought the very end of the play with the melodramatic sequence in which the vagrant Snatch attempts to rob Ruby, but is foiled by the entrance of Marcus and Tony, not as convincing or as well choreographed as it possibly could be. The resolution of everyone’s problems was not unconvincing, but perhaps it was too “and they lived happily ever after.”

The television direction and production worked well I thought, overall. The ending I mention above could have been better worked out and more carefully screen-played. But this is not to complain. The drama held attention, was well-paced, the acting in front of cameras worked fine (and this for younger actors who may not have had much experience in film acting). And while this was a typical Forde play, his theme of young aspiring artists resisting the pull of parents and society to go in the usual predictable ways of professional career, seems to be a development of subject for this playwright. It should strike a chord with young persons, even as the marriage struggles of the parents should echo many of the familiar challenges of middle-aging parents.

Congratulations to the CDF and Calabash TV who produced this television drama. Congratulations to Forde and his band of talented players of Gemstones Theatre who have done well and competently in this portrayal of urban Castries lives which will be very familiar to viewers. Hayden Forde has established himself as one of Saint Lucia’s premier playwrights and directors. Every play of his marks out distinctively the space he has cleared for himself among very distinguished elders and contemporaries.