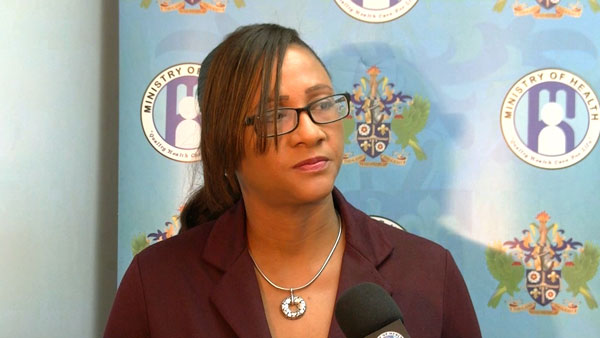 George, along with Health Minister Mary Isaac at a news conference confirmed that a British female, 63-years-old with a travel history from the United Kingdom entered Saint Lucia from Grenada on March 7, 2020 with her husband via British Airways Airline.

The woman was presented to health authorities on March 11 when a clinical sample was taken from her and sent to CARPHA for testing. The results were received yesterday afternoon.

According to the CMO no effort is being spared to protect the health and safety of the health practitioners who are in the care of the person tested positive for the virus.

Belmar-George said the authorities were doing the required contact tracing of the woman’s contacts who have yet to display signs and symptoms of the virus.

“I recognize that this situation is one which we all hoped would not have occurred but one which we have been planning for over the past few months,” Isaac said, noting that the team at the Ministry of Health had been preparing for this likelihood and have activated the team to manage the case.

In an effort to calm the fears of the general public Isaac said that all is being done to ensure their health and safety.

“Please be assured there is no need for panic. My team at the Ministry of Health continues to work on all elements of our response to this first case and the possibility of further cases being diagnosed over time,” Isaac said.

“To date we have only one confirmed case of coronavirus. While we recognize the possibility of further cases all is being done to prevent this,” Isaac said.

Yesterday there were three persons in isolation at medical facilities, including a nurse. According to Belmar-George all three were tested with results being negative. There are two suspected cases from which samples were taken from yesterday awaiting results.

Meanwhile government has taken the decision to cancel one of its most acclaim events for the year – Saint Lucia Jazz 2020.

The decision comes in light of the revelation that the country had recorded its first case of the coronavirus.

More and more countries of the Caribbean have now embarked on measures to mitigate against the dreaded virus. The cancellation of the well-known event which takes place in May was announced via a press statement from Events Saint Lucia Inc., which is responsible for its hosting.

Considered one of the most, if not the most, recognized jazz event in the Caribbean, Saint Lucia Jazz this year, as was last year, was produced in collaboration with Jazz at Lincoln Center. This year’s Saint Lucia Jazz was expected to feature some of the finest names in modern jazz.