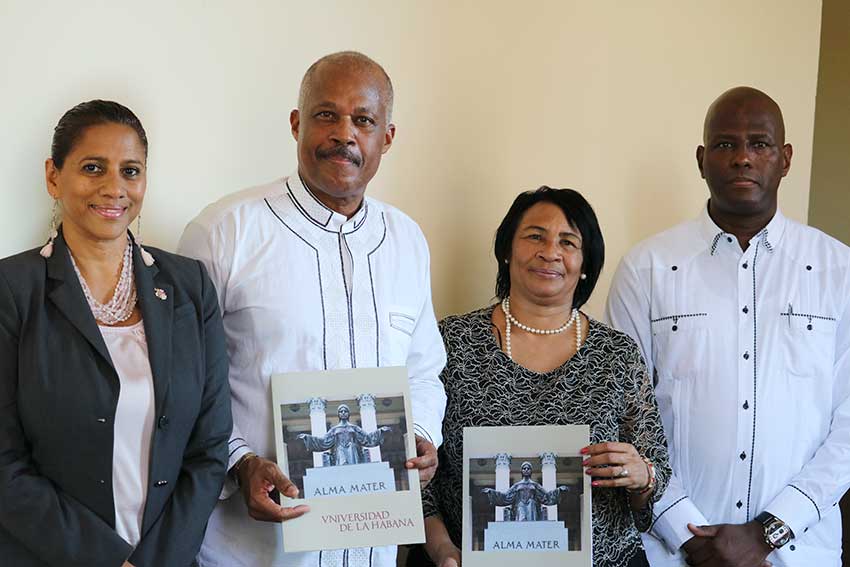 THE historic moment finally arrived on December 11, 2019, when The University of the West Indies (The UWI) and the University of Havana (UH) signed an agreement to establish a new and innovative, joint Institute for the Sustainable Development of the Caribbean. For some 30 years, the two universities collaborated on the margins of their respective mandates, occasionally exchanging students and promoting collaborative research projects in areas of mutual interests.

“But the time came”, said Vice-Chancellor of The UWI, Professor Sir Hilary Beckles, “to elevate these relationships to the highest possible professional level, by creating the institutional context for formal, top quality research collaboration to promote the sustainable, economic and cultural development of the people of the Caribbean.” He explained that driving the diplomatic initiative to deepen the bond between the people of CARICOM and Cuba through the research of their respective universities, was a top priority of his administration, and the considerable time invested in securing the agreement “was an honour and pleasure.”

The agreement was struck when President of the University of Havana, Professor Miriam Nicado García, a distinguished Mathematician, and the first Afro-Cuban to head the 200-year-old university, hosted Vice-Chancellor Beckles and his UWI team in Havana, Cuba. That team included Ambassador Gillian Bristol, Director of The UWI’s Latin American–Caribbean Centre (LACC), who was key in developing the project. Together, The UWI and UH conceptualised, coordinated and finalised the operations of the joint research institute, whose mandate is to promote innovation and scientific application in three broad areas of regional development — application of medical research and innovations in critical areas of public health, such as diabetic foot amputation, invasive eye treatment, and cancer studies; scientific research into Caribbean natural products, and the industrialisation of research findings; and promotion of Caribbean culture and tourism, social justice issues, and commercial development in the area of cultural industries.

These three broad pillars of collective engagement, President Nicado García noted, “will integrate research, scholarship, and strategic planning for transformational development that will benefit CARICOM and Cuba, while expanding the important role to be played by universities in the sustainable growth of the region.”

Vice-Chancellor Beckles conveyed his gratitude to Ambassador Bristol for her leadership on The UWI’s behalf. He commended President Nicado García, for the excellent physical facilities made available to The UWI-UH Institute within the historic campus of the University of Havana, adding that researchers and scholars at The UWI would be excited and stimulated to make full use of them.

Pro Vice-Chancellor and Campus Principal of The UWI, Mona Campus, Professor Dale Webber indicated his delight to have—within The UWI system—the joint institute centred at the Mona campus and placed under the guidance of two of its distinguished scholars: Professor Michael Taylor, Dean of the Faculty of Science and Technology, and Dr Tomlin Paul, Dean of the Faculty of Medical Sciences.