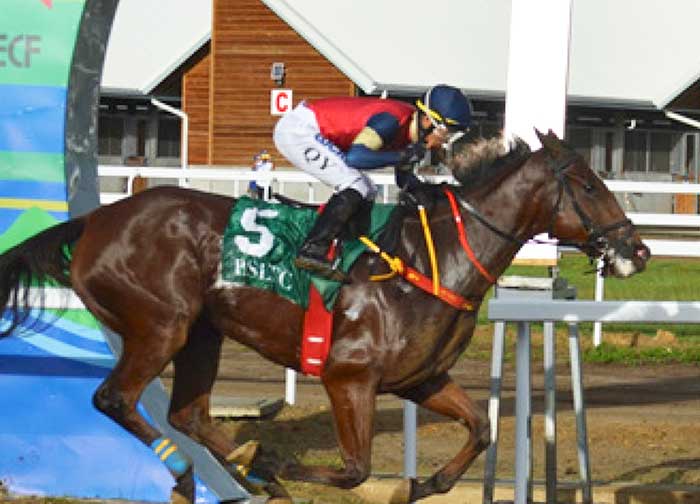 HORSE racing burst into life at the Royal Saint Lucia Turf Club Friday as the island nation became the newest member of the international racing family. Under sapphire skies a “who’s who” from the worlds of business and sport descended on Saint Lucia to bear witness to the unique occasion.

The luminaries were witness to a spectacular afternoon of horse racing that culminated in a scorching win in the USD150,000 DSH Caribbean Star Ltd Pitons Cup (1800m) by Casting Crowns. The mare was also travelling well under the care of Australian based Chinese jockey Qin Yong and made its winning move early in the straight when sliding up the fence passed eventual runner-up Colonel’s Pride before racing away. For the winning connections of famed US breeding, racing and consigning operation Taylor Made Farm and winning trainer Deon Visser, it was an irrepressible result.

“The people here are the friendliest in the world. Today has been an amazing experience and we will definitely be back.

“This place [The Royal Saint Lucia Turf Club] is going to be a great success and we want to be a part of it. We will be going back home [to the United States] and telling people they need to be involved here.”

The creation of a new industry in such a traditional sport is unheard of. What made today’s occasion even more notable is that the commencement of the Royal Saint Lucia Turf Club marked the launching of the first stage of the nation building project, the Pearl of the Caribbean.

“The words of His Excellency Sir Neville Cenac [Governor General of Saint Lucia] were very appropriate in explaining the significance of today. National Day is always a celebration and today is the first day in a transformational journey for this country and its people,” said Teo Ah Khing, Chairman of DSH Caribbean Star Limited.

Prime Minister Chastanet was unwavering in his belief in the positive impact horse racing and the Pearl of the Caribbean will have in his country.

“The smiles of peoples faces the experiences people are having today says so much. Saint Lucians have been wanting something like this new industry of horse racing and now they have it,” said Prime Minister Chastanet.

“The facility here is world class. Saint Lucia is now positioned to be part of the international racing fraternity and a leader in the region. We need to continue working now to build upon the goodwill and success of today and also work with our peers around the region to grow this sport and to create more opportunities for Saint Lucians.”