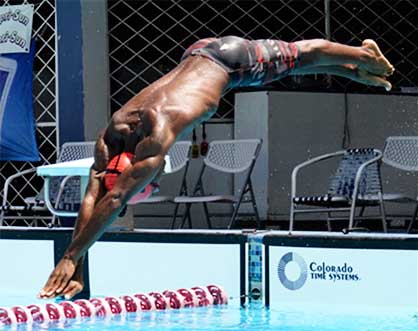 THERE is exactly one week to go before Saint Lucian swimmers dethrone defending champions Grenada at the 29th edition of the Organization of Eastern Caribbean States (OECS) Swim Championship in Saint Vincent and the Grenadines (SVG). Sharks teenager, 16-year-old Allandre Cross, hopes to continue his good run on form from where he left off at the Seajays / Capri Sun National Short Course swim championship held recently at the Rodney Heights Aquatic Centre.

In the high point individual awards, Cross finished in second place in the boys 15 -17 age group with 65 points, 7 points adrift from the eventual winner Jayhan Odlum-Smith from Seajays Swim Club. His outstanding performance earns him bragging rights to represent Saint Lucia at next weekend’s OECS Swim Championship in SVG (November 8-10).

Allandre is a fifth form student at St Mary’s College. He started swimming in Jamaica at the age of 6 when he expressed his love for water and how it made him feel whenever he saw a large body of water which attracted him.

He was first enrolled in the University of Technology Summer Camp in 2009 in Jamaica, then according to his mother he expressed, “Mummy this is my passion, I really want to continue.” He came to Saint Lucia at 8 years old (2012), and continued his swimming at the Rodney Heights Aquatic Centre (RHAC), swimming only on Saturdays with Coach Brad Worrell (present coach is David Peterkin).

He started swimming competitively at the age of 9, and represented the Sharks Swim Club in 2016. At age 13 he had already represented Saint Lucia 10 times. His favourite strokes: 100 metres Butterfly and 100 metres freestyle.

At the OCES Swim Championship in Saint Vincent and the Grenadines, Allandre will compete in 11 events. He spoke with this reporter about his expectations at the competition.

“I would like to improve on my times, support Team Saint Lucia by helping them win the 29th edition of the championship and have fun while doing my best,” he said.

In terms of medals and other awards won to date, Allandre said, “Uncountable; though I have not yet set any national record I won the then SLASA now (SLAF) recipient awards of the 9-10 age group; Most Outstanding Sharks Swimmer in 2017 and I was the recipient of the Karen Beaubrun award in 2019.”

Allandre has a passion for swimming; and he plays lawn tennis during the summer.

He cites American, CaelebDressel as his favourite swimmer.

“He is a devoted and successful butterfly and freestyle swimmer. His calmness before he enters the pool, Caeleb also understands that it’s not just about medals, but doing your best at all times representing your country, school or club with pride,” Allandre noted.

Though he mostly sticks to a fairly regulated diet, Allandre loves pizza and a nice chocolate milk shake occasionally.

In an interview with his mother, Heather Richards-Barnard, she informed that he also played table tennis and was very good at it; however the training time for table tennis was clashing with his swimming times so the two had to make a decision between tennis and swimming. That choice is evident today.

Speaking of the sort of impact she felt she had on him as his mother, Allandre’s mom commented: “My impact would be to support him, encourage and provide the necessary tools he needs to be able to swim. I have to ensure that he eats well and rests well while creating a balance with his academics. There are challenges that a swim mom faces; making sure that he stays up late to complete school assignments, and that he gets up early in the morning to train.”