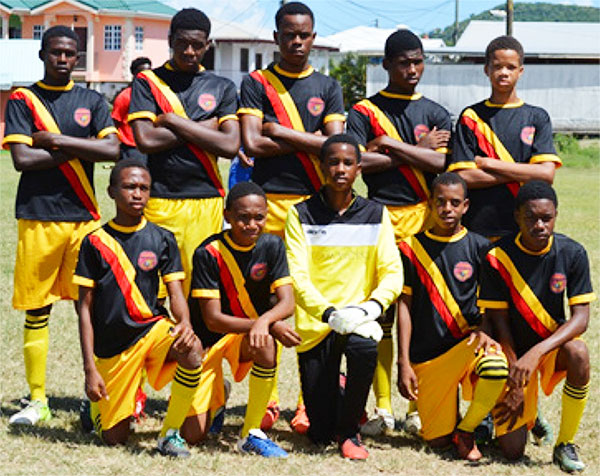 THE Gros Islet Playing Field (GIPF) came alive this past weekend when the GIFL staged another series of matches in the 2019 Guardsman Under 14 Invitational Football Tournament. The tournament is sanctioned by the Saint Lucia Football Association (SLFA) Inc.

The highlight of the weekend showpiece was a beaver trick scored by Donavan Phillip for B1 FC against GMC United.

In matches played on Saturday 12th October, New Generation edged out CT Foundation 2 – 1 with their goals coming from Onri Thomas in the 37th minute and Rickelme Lionel in the 39th minute.

Jernelle Monrose scored for CT Foundation in the 46th minute.

The action continued on Sunday 13th, under near perfect weather conditions and in front of an appreciative crowd of at least 30 parents who made the early morning trek to see their children exhibit their talent; in game one, Flames United got the better of Valley Soccer 3 – 1. The goal scorers for Flames FC were Jeremiah St Brice in the 24th and 39th minutes and Deandre Pierre in the 14th minute.

Lancers FC defeated New Generation 3 – 0. For Lancers FC the goal scorers were Kalvin Marius in the 9th minute, Adrian Desir in the 12th minute and Ajani Sanganoo in the 23rd minute.

For GMC, Kareem Knight scored in the 33rd and 50th minutes, Joshua George in the 43rd minute and Mikel Castang in the 57th minute.

GIFL President Shayne Paul spoke to the VOICE after last weekend’s matches. Paul said, “The teams are growing in confidence, our game play is getting better. What I have really noticed is that teams are not being beaten 8-0 or 6-0… we have some close games; you have teams giving it their all until the end.”

The GIFL President made a special appeal to all participating clubs: “One thing we have to worked on is punctuality; teams are coming in for their encounters too late. We have a very tight schedule so we are appealing to all the clubs try and be on time for their respective games so it won’t affect the schedule of the other matches of the day.”

Another area of concern is the hydration of players throughout the week. According to Paul, “We want to encourage parents and coaches to let the players drink lots of water so when they play at 10.00 a.m. and 11.00 a.m. they are properly hydrated so that will prevent cramps and injuries.”

Paul added, “We are meeting our objectives and we like what we see; a lot of young men are getting the opportunity to play. We have 10 clubs participating, over 200 players exhibiting their skill/ talent on a weekend which is good and getting playing time for their respective clubs. After 12 games played to date, things are moving smoothly and we hope we can continue along that path until the end of the tournament.”

Meanwhile, matches continue this weekend at the same venue (GIPF). On Saturday 19th, from 1.00 p.m. game No.13, B1 FC goes up against New Generation and Big Players FC plays Flames FC at 2.30 p.m.