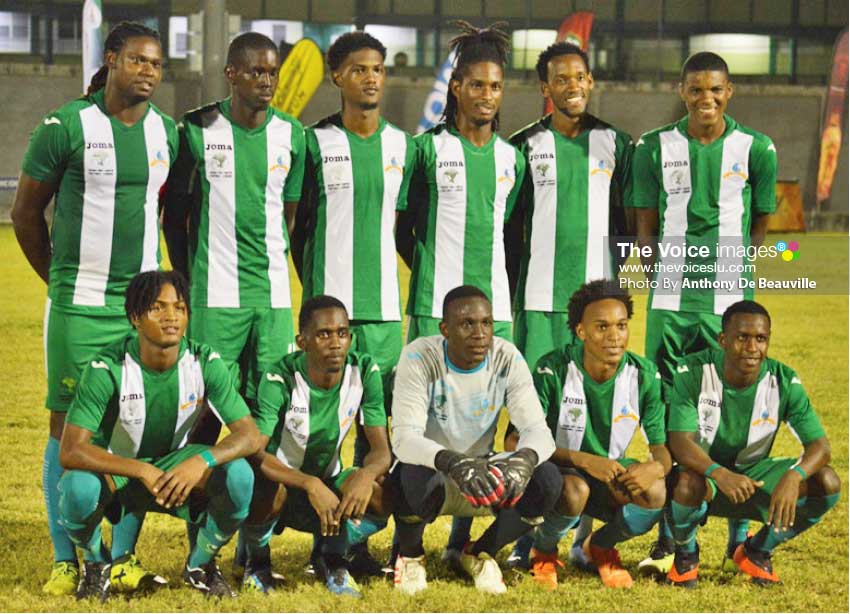 THE lineup and battle lines have been drawn, the pitch is even and a massive crowd is expected to converge on the Phillip Marcellin Ground in Vieux Fort tomorrow (Wednesday 2nd October) for the semifinal showdown in the 2019 Blackheart Production / Saint Lucia Football Association (SLFA) Inc. Knockout Football Tournament.

Meanwhile, Mabouya Valley, Micoud, Marchand (Castries) and defending champion Vieux Fort South booked their places in the semifinals of the 2019 Blackheart Knockout Football Tournament after victories this past weekend at the Phillip Marcellin Grounds (Vieux Fort), as the tournament resumed after the conclusion of the Hero Caribbean Premier League T20 Tournament.

On Saturday evening, in the opening encounter of a double header, SLFA’s defending Island Cup Champion Marchand advanced via penalties over Dennery after the game ended 2 – 2 in regulation time.

From the opening whistle of Referee Kim Charlery Dennery went ahead via a No. 9 Ridel Stanislaus goal in the 31st minute.

The east coast team had several scoring opportunities to go further ahead but unfortunately these chances went a begging. Dennery was made to pay through a defensive blunder, which allowed No. 14 Lincoln Phillip to equalize in the 45+2 of added time in the first half.

Following the resumption, No.14 Lincoln Phillip, one of Marchand’s most prolific goal scorers in recent times once again capitalized on a defensive blunder to send his team 2 – 1 up in the 50th minute.

With 40 minutes left in the game, the boys from the east coast found the much deserved equalizer when No. 16 Kermichael Sexius found the back of the net in the 78th minute; despite both teams attempts to seize the upper hand, no further goals were scored as the game ended 2 – 2.

It was down to the penalty shoot-out, which saw Marchand nosing ahead 5 – 4.

In the second game, two-time champion Micoud defeated Soufriere 1 – 0, a goal by No. 7 Raii Gaspard in the 71st minute.

The showpiece continued on Sunday 29th with another double header at the PMG in Vieux Fort.

In the first encounter three-times champion Mabouya Valley defeated Central Castries 1- 0, the goal scored by No. 7 Peter Alfred in the 13th minute of play.

In the much anticipated matchup between defending champion Vieux Fort South and last year’s quarterfinalist Desruisseaux, this one was billed as a (“Revenge matchup”) as VFS defeated Desruisseaux 3-2.

In Sunday evening’s encounter it was the battle of the two goalkeepers at either end of the pitch, as they were both outstanding between the uprights, hence after regulation time the scoreline remained nil all. VFS would have themselves to blame for squandering an easy scoring opportunity with 5 minutes left on Referee Andrew Phillip’s watch when No. 9 Antonio Joseph in a one on one situation with the goalkeeper hammered a right foot shot wide of the uprights to the dismay of the VFS supporters.

But before that aspect of play, in the 23rd minute VFS No.4 Alex Joseph playing left back was taken to St Jude Hospital (George Odlum Stadium) by ambulance out of precaution following a head on collision with a Desruisseaux player in an attempt to clear the ball. Joseph regained consciousness some 25 minutes later.

Before press time yesterday, the VOICE spoke to VFS Jamil Joseph (captain) about Alex’s situation, he said, “Joseph was discharged after midnight and is feeling better. We will continue to monitor his progress as we are keeping our fingers crossed that he fully recovers.”

In the nerve racking penalty shootout that ensued the defending champion prevailed 5 – 4. National goalkeeper Vino Barclette again in the thick of things for VFS when he came up with an outstanding save going to his left to save penalty No. 3 taken by Desruisseaux No. 18 Jamal Francis.