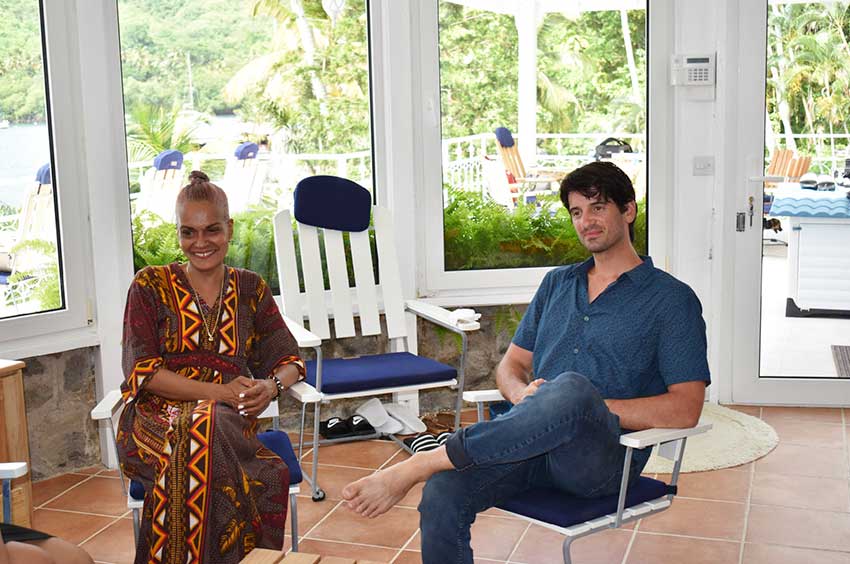 Vicky Steckel doesn’t consider herself to be a photographer, even though she makes thousands of dollars on a single undoctored photograph of her work.  She is by definition, an artist. It is as simple, and complicated as that.

Vicky’s love for art has taken her to many places, and has long since made room for her in the upper echelons of international fashion.

She describes her creative process as “sort of like a performance art”, where she the artist, at the end, documents her work. Building layers is important for Vicky, as it adds to the dimensions of her art. This can be seen in the end result of her pieces, which have a 3-dimentional look.

For the purposes of this article, I met with Vicky and her team in Marigot on Tuesday this week, when they visited the island to execute a commissioned piece. When I got to the house of Patron Fred Schader, an art collector based in California, Artist Assistant Jupiter Jones, art curator Reanna Cool and other team members had already completed the set up.

For her project in Saint Lucia, Vicky would be using a canvas backdrop she’d painted over a year ago – long before she had any inkling that she’d be painting and photographing a young, beautiful Saint Lucian model called Lily.

Even before painting it, she’d washed the canvas just so it would wrinkle just right. She explained as we spoke, “I add layers and dimensions, and paint over that.”

After that the subject, in this case Lily, goes in the middle. She will be painted as well, and then the plastic sheet in front of her, which Vicky will also paint.

Vicky describes it as a “sandwich”, and if it was, it would definitely be gourmet.

This process is what creates the illusion of a painting, in the final photograph, which is not photoshopped, or manipulated in any way.

When asked about her inspiration, Vicky goes all the way back to her days in the fashion industry. She worked with models, applying make up at photoshoots, and later started doing body painting.

“I’ve always been a painter,” she said. “… One day, I had a lot of leftover paint, and my brother was over. It was Christmas. I decided to paint him with the leftover paint that we had. After I painted him I was like, ‘that was great, what should we do now?’ He was standing in front of one of my oil paintings, and immediately I told him, ‘don’t move, I want to take a picture.’ So I took a picture, and it turned out really shocking, and not like anything I was expecting.”

This was the beginning of a whole new world for Vicky. She was intrigued, and started building, and exploring the concept. The more she did, the better she got.

“I started adding more elements to it, until it was basically a human collage,” the artist said. “I added to the skin, added to the canvas, added to the plastic. I threw in shoes, hats… painted the hair…” she trailed off.

“I’m really excited to paint Lily…” she said looking adoringly at her young subject, who was sitting a few chairs away.

Lily smiled, and it was clear they’d already created the sort of bond that all artisans hope for.

Vicky was born in the Dominican Republic. She and her family moved to the United States when she was young; her mother first in the 1970s, and herself, in the 1980s.

She never went to art school, and is proud to say that she is “self-taught”.

“I was born an artist,” Vicky says matter-of-factly. “I used to make heads out of mango pits when I was very young. You know when you eat the mango and there are the little hairs… I used to draw faces on that. I made clothing for them; I used to make them into dolls. Then after that I used to cut paper dolls.”

Back then, Vicky’s family didn’t have money to buy toys, so she understood all too well what it meant to make do, and this she believes contributed to the development of her creativity.

“When you have everything in front of you, you can’t appreciate it,” she says, “but when you don’t have sources, you look for the sources. I think you become more creative, when you really have to dig into your thoughts.”

Of all her work, the series she loves best is ‘Fallen Blue’, a captivating collection that incorporates colours, moods, and other intricate aspects. ‘Fallen Blue 3’, a sold out piece, is priced at US$16,000.00.

“They’re all great, but this one in particular is one of my favourite ones,” she says.

As we sit and talk, she pulls out a tablet and proceeds to show me a Marie Claire magazine spread, where four models are decked out in six different looks, created by her. She flips to another – a photo of a model posing with her mother’s crocheted tablecloth as a prominent feature.

“It belonged to her for years, and she gave it to me…” Vicky said, speaking to the sentimental concept, which she believes tells a story of protection and love.

Prior to getting started on the commissioned piece for Fred, which involved Lily, Vicky recalls requesting a photograph of Lily, just so she would have an idea of what she was working with. Just as soon as she saw the photograph, she says she automatically knew the collaboration was meant to be. Her feelings were confirmed when a friend filled her house with lilies of all varieties unexpectedly, days before she found out Lily’s name.

“This is meant to be… It’s supposed to be,” she said. “When I first put those colours on that canvas, I imaged a girl like Lily… the skin tone, because of the gold, and the pink, and the yellow… it’s just absolutely beautiful.”

Art collector Fred had seen her work just prior to an exhibition she’d done in Los Angeles earlier this year, and had fallen in love with it. He’d even purchased Fallen Blue 3.

According to Vicky’s Artist Representative / Gallery: James Trotta-Bono / Trotta-Bono Contemporary, “When Fred received the work (Fallen Blue 3) he loved it. He thought it would be a lot of fun, and exciting, and a beautiful collaboration, to have Lily and Vicky working together. That’s essentially how we came here. It’s always a fine line between having the artist have complete creative control, and then essentially pleasing the client, and helping them to ascertain their goals, desires and wishes. The beauty in this relationship here is that it is 100 percent collaboration. They got along right away… it was beautiful energy. This is what you want and hope for when it comes to creating something truly unique.”

Describing Vicky’s work, James added, “This is not just photography, this is not just painting… its painting, its mixed media, its performance… it’s a collaboration. The photograph is often the final product, or the final work of art, but there’s so much more that goes into it.”

Fred is based out of California, and according to his art curator Reanna Cool, he’s been collecting art and antiques for over 40 years.

“I work for Fred in his art collection, and this piece really does fit perfectly into what he’s got already. He’s kind of filling a specific void in his collection at the moment, and it just so happens that Vicky is filling that space quite nicely,” she said.

Lily Thomas who had been mostly quiet hopped into the conversation at this point. Coming from the small community of Laborie, she was over the moon excited about the project.

“This is the first time I’m doing something like this,” she said. “I’ve done photoshoots before; I’ve modeled before for carnival bands, but this is different, and it will be an amazing experience for me. It will help me with my confidence, a lot.”

I also spoke with Lily after the shoot, and she was just as blown away by the experience: “Everyone was great, it was amazing. At first I was nervous, but then I realized that I was comfortable with everyone I was working with. [Vicky and I] built such a good relationship, it felt like it was my older sister painting me. The biggest challenge for me in all this was just the thought of me being completely naked, because I was not as confident in my body, as I was when I was done with it. The whole experience was an eye opener to me. We started at 6 p.m. on Wednesday, and we were done at 5 a.m. the next day!”

For his part Fred expressed, “Lily and I were looking at different artists, because I’m into the art business, and always looking out for new talent. I saw Vicky’s things and went online and looked at more and more of her things, and was very attracted to it. We bought a piece that she had in an exhibition, and then we talked to James, thinking what a great idea it would be to match Lily up with Vicky, and see what would be the result of that. That’s how it all happened. It seemed like Lily would be a natural.”

As for why he chose Marigot Bay for his new home: “Well, as American author James A. Michener said back in the 50s in his book ‘Hawaii’, this is the most beautiful harbour in the Caribbean, so I respect his words!”