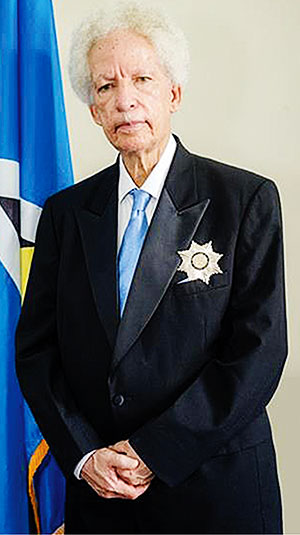 Sir Emmanuel Neville Cenac, Governor General (GG) of Saint Lucia, delivered a much-anticipated Throne Speech on the occasion of the Fourth Session of the Eleventh Parliament of Saint Lucia on Tuesday, April 9. The speech served as an introduction to the official ‘budget season’.  Noting that the session took place against a backdrop of an international climate that was more fluid and uncertain than ever, Cenac spoke of unpredictability being the new order of the day. His words were relatable on several fronts, chief among those, the level of recognition that Saint Lucia much like the rest of the world, continues to change and grow.

As a Small Island Developing State (SID), the governor general said there were inevitably the consequences of vulnerability, which could be seen in increased natural weather phenomena brought on by climate change, and other often indirect external shocks, which affected the island in significant ways. Nonetheless, and in tune with the theme of still ongoing Independence celebrations, Cenac brought home the message that the people, who had been born of this rock, were not victims.

As he spoke about untapped intellectual energy and immense potential, it was hard not to think of all the young ones from our island with desire and passion, but not necessarily opportunity, motivation, or even finances to pursue their dreams. Though the island has made notable progress in the direction of universal primary and secondary education, some still fall through the cracks. It is not hard to conjure up a Saint Lucia where citizens reaching their full potential supported by requisite systems and programmes is the norm, but the reality we face at the moment is a little different, and largely unequal. Our most hopeful and enthusiastic don’t always manage to stay on the right path, and even for the ones who do, success is not always an easy feat.

Cenac in his speech, however, stayed on a positive and hopeful route. With invaluable resources available, human resource and the like, he noted Parliament needed to bear the burden of commensurate accountability. He urged that peace and good governance were most important for Saint Lucia, like any other country to progress. Urging all to rise to the occasion, Cenac was optimistic that we could all make Saint Lucia the best of all worlds.

Empowerment, inclusive growth, and the appropriate policies and laws to support these were all highlighted by the governor general. Legacy building, in light of Saint Lucia’s 40th Anniversary of Independence, was also a highly relevant area touched on by the governor general and spoke to the government’s desire to not only achieve and build on things that were relevant now, but things that would be able to sustain the island, and boost the economy in years to come.

The GG highlighted Saint Lucians including Sports Woman of the Year Levern Spencer, entrepreneur Johanan Dujon, national cricketer Kimani Melius, and sportswoman Julien Alfred. In his words, their achievements were all part of the reason Saint Lucia was a remarkable nation.

Other topics touched on by Cenac were education and health (he recognized that the education system needed to be responsive to the varied needs of our children and that quality and affordable healthcare was vital for a productive and reliable human resource base), agriculture, improving the business and investment climate, infrastructure, international relations, public finance management, security, tourism, the energy sector, and others. Interestingly, the GG noted that government would ‘increase the use of electrification for powering the fleet of government vehicles’, and install solar photovoltaic systems in some schools.

Cenac’s Throne Speech while focusing on some of the island’s achievements, provided insight into what could come out of this year’s budget. His recommendation for Saint Lucia to be truly great? ‘Show a little kindness to those who have fallen by the wayside.’

See this weekend’s edition of The VOICE for a full breakdown of the Throne Speech.