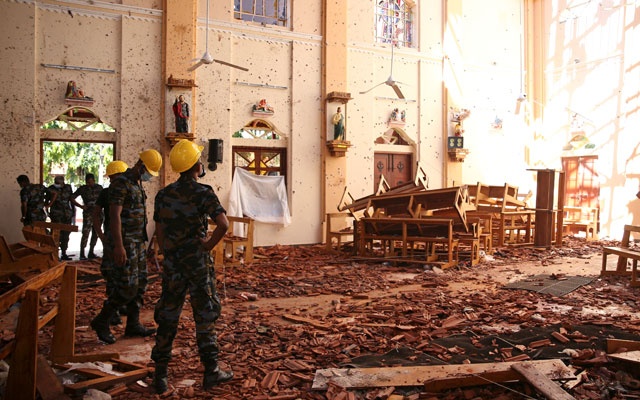 The number of Christians killed in the Sri Lanka Easter Sunday Massacre has topped 300, with over 500 injured – and still counting.

Bodies of innocent people who went to church on the holiest day of the Christian calendar are being buried in shallow graves, as families mourn at mass funerals while the authorities continue to recoil under the pressure of the worst coordinated mass attack in the modern history of a country that’s no stranger to the most terrible aspects of war.

It’s turned out that the Sri Lanka military and intelligence bodies had been forewarned — at least ten days earlier — that there would likely be suicide bombings against Christians during the Easter weekend, but the political directorate was not informed.

Worse, it’s also turned out that the international element earlier suggested by the Sri Lanka authorities was true: the attack at eight locations around the country involved a sophisticated level of external coordination – and ISIS is now claiming responsibility, saying it was in response to the mass shootings of 51 Muslim worshippers at two mosques in Christ Church, New Zealand, earlier this year.

ISIS or not, the planners and executors of the Sri Lanka massacre decided, in advance, that it was okay to retaliate against the killing of 51 Muslims by similarly also killing six times that number of Christians elsewhere.

Fact is: Christians have been coming under increasing attack by religious extremists around the world, including Egypt, where Coptic Christians were killed in their churches recently, in a growing trend that’s sending shivers up the spines of Christians in those countries where Christians are in the minority.

Religious wars and crusades of the past are being reincarnated in these times by maniacal minds executing actions that reduce human lives to commodities of death, messes of pottage and mere collateral damage, occupational hazards in a so-called ‘Holy War’ that uses politics and people as cannon fodder.

The most extreme of the extremists find all sorts of appropriate religious texts to justify their actions, regardless of and insensitive to the impact in areas selected for death and destruction — and the families they leave behind.

The majority Christian Caribbean, like the rest of the world, is slowly coming to realization you can be killed for choosing the religion of your choice, in this case for choosing Christianity.

Muslims are also being targeted and attacked in countries where they are minorities.

Since the 9/11 attacks 20 years ago, Muslims in the USA, the UK, as well as across Europe, Canada, Australia, New Zealand and other majority-Christian nations have been under consistent attack in one form or another, whether through religious persecution, state surveillance or pure ‘Islamophobia’.

Sadly, this trend of attacking Christians and their symbols is also prevalent in Europe, with churches being vandalized, burned or otherwise attacked like never before. And again, ditto attacks on Muslim mosques.

Just as sad is the fact that in most cases, young and intelligent minds not only participate in these attacks but also use religious and pseudo-philosophical arguments to justify such human slaughter.

The rise of ISIS brought with it a level of sophisticated recruitment through the Internet that internationalized its membership base across borders and beyond all previous boundaries.

Their recruitment and operation have allowed it to have tentacles spread across all continents, with citizens, known and unknown, returning to their respective nations to futures unknown, mostly to be jailed, targeted and trailed forever by intelligence agencies.

Women and men, among them well-trained fighters, have returned home by the thousands, some wanting to exact as much pain, at home, to those countries that contributed to the destruction of their Caliphate that once stretched from Iraq to Syria, covering territory larger than many European states.

Unfortunately, this confluence of actions and retaliations by those using religion as a basis for war and human destruction also allows for inclusion of negative trends such as racist, fascist and other right-wing nationalist tendencies, as seen in several other recent cases of mass killings.

Like the rest of the world, the Caribbean is waking up to the reality of the fact that in the world today, one can still be persecuted and prosecuted, even killed, for deciding what religion to choose and follow.

This largely Christian region, comprising mainly of former European colonies populated mainly by people of African descent and indigenous minorities — and all of whose ancestors were forcibly Christianized by the European conqueror — also has significant Muslim and Hindu populations, as in Guyana, Surinam and Trinidad & Tobago.

The Christian-Hindu-Muslim divide across the Caribbean is mainly faith-based and played-out in such areas as denominations demanding equal recognition from the states, as in Guyana, where all official public ceremonies start with prayers by representatives of all three faiths.

In all three countries too, political parties have ethnic and religious bases, with race, religion and culture driving politics at election time in ways other than in majority-Christian societies where the politics is mostly driven by partisan loyalty and benefit than by race, religion or culture.

The Caribbean is not known for violent or otherwise injurious expressions of fanatical religious discontent or intolerance, as people generally respect others’ choice of religion or denomination.

Not that there have never been regretful, life-taking events involving Christians paying the ultimate cost of merely going to mass – and on a day least expected.

On the night of the last day of the last century – December 31, 1999 – two young men attacked worshippers at Saint Lucia’s Minor Basilica of the Cathedral of the Immaculate Conception, the island’s biggest Catholic Church, located in the center of the capital city, Castries.

The men indiscriminately doused fuel on members of the congregation and the clergy and set them alight, resulting in the death of a priest and a nun and many others badly burned.

The two attackers did not belong to any known group and after being captured soon after, the pair said they acted alone.

The two Lone Wolf attackers were tried and eventually sentenced to ‘Life Imprisonment’.

Interestingly, the leadership of the island’s majority-Catholic church indicated, from the very beginning of the trial, that they did not want the Death Penalty (by hanging, in this case) for the two attackers, much to the dismay of the victims and their families.

Having almost ended their legal terms in jail, the two – who have never expressed remorse — are about to be released.

This sort of Caribbean tolerance isn’t limited only to religion – or restricted to Saint Lucia either, as inter-faith marriages are common in all countries and no one will be turned back, far less killed, for entering a place of worship.

In Trinidad & Tobago in July 1990, 114 members of a group named Jamaat al Muslimeen carried out an armed attack on the national parliament and took over the nation’s top TV and radio stations while in session, taking Prime Minister A.N.R. Robinson and members of the government and opposition hostage, in the process demanding respect for the twin-island republic’s Muslim minority.

24 people – including a parliamentarian — died during the six days of chaos, but the coup leader, Yasin Abu Bakr, eventually negotiated an amnesty from the republic’s President for their surrender, without prosecution.

However, perhaps the best example of religious tolerance in the Caribbean is in Paramaribo, the capital city of Surinam, where a Muslim mosque and a Jewish tabernacle stand side by side – and share a parking lot between them.

The Caribbean has never been a theatre of war and never mind the increasingly frequent rattling of sabers across the Caribbean Sea, the heavily tourism-dependent region continues to be better known for its hospitality and tolerant attitude towards others.

Which is why hardly anyone outside Surinam attaches much significance to the fact that a mosque and a synagogue can co-exist side-by-side, with absolutely no worries.

But Caribbean people of all faiths – Christian, Hindu and Muslim – do share the common grief of those who have lost so many loved ones in Sri Lanka, as they too, like people everywhere, do not condone such senseless acts as taking another human life just because someone else decides to worship a God of their choice.