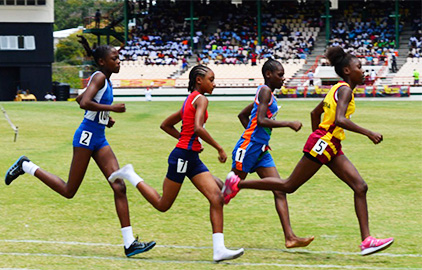 ST. JOSEPH’S Convent (SJC) will get things off and running in the 2019 track and field season for schools on the island on Thursday 24th January.

According to School Sports Coordinator Isabel Alexander-Marquis, the meeting was to review the First Term’s sporting activities and to plan ahead for term two.

She said, “This will be followed by the Secondary Schools Under-19 Massy Cricket Tournament and the Unde-19 Schools Male and Female Volleyball Tournament.”

The first Schools Sporting activity to be contested is the Inter District Primary Schools Table Tennis competition is schedule for the end of January.

Sports coordinator at SJC, Michael Anius, spoke to the VOICE before press time on Friday 18th. He said, “The day will start off with the parade of the various houses, St. Maria Goretti, St. Anne, Blessed Anne and St. Theresa; followed by the national anthem, prayer, addresses by various stakeholders including School Principal Rufina Donat, the athletes Oath and Officials Oath are also on the cards.”

The Soufriere Comprehensive Secondary will be on the track on Thursday 31st January at the Soufriere Mini Stadium; while the Ave Maria Primary will march their way to Mindoo Phillip Park on that same day for their showdown.

Choiseul Secondary will get things going on the West coast on Thursday 7th either at the La Fargue playing field or Soufriere Mini Stadium.

On Friday 8th the friendly rivalry amongst the various houses heads to the La Guerre playing field as the Babonneau Secondary will stage their event at that venue; the Mindoo Phillip Park will come alive as close to 600 students from the Ave Maria Girls Primary will compete for their represent their houses as they look to win this year’s inter house championship ; The La Ressource playing field will have their share of events as well as the Stanley Jon Odlum Secondary School students will travel to that community for their sport meet.

Sir Arthur Lewis Community College (SALCC) known for staging one of the best sports meet amongst the learning institutions on the island will have their day on Monday 11th at the Mindoo Phillip Park; Marchand Combined School, a stone throw away from the MPP, will stage their event on Wednesday 13th.

On Thursday 14th, it’s the turn of Beanfield Comprehensive Secondary; BCS students will have a two minute walk to the Phillip Marcellin Ground where the four houses will compete; On the same day Bocage Secondary School will converge on the Mindoo Phillip Park for their exhibition and to bring the curtains down for the first half of February, the running fever moves to the La Ressource playing field in Dennery for the second time as Clendon Mason Memorial Secondary students will showcase their talent.