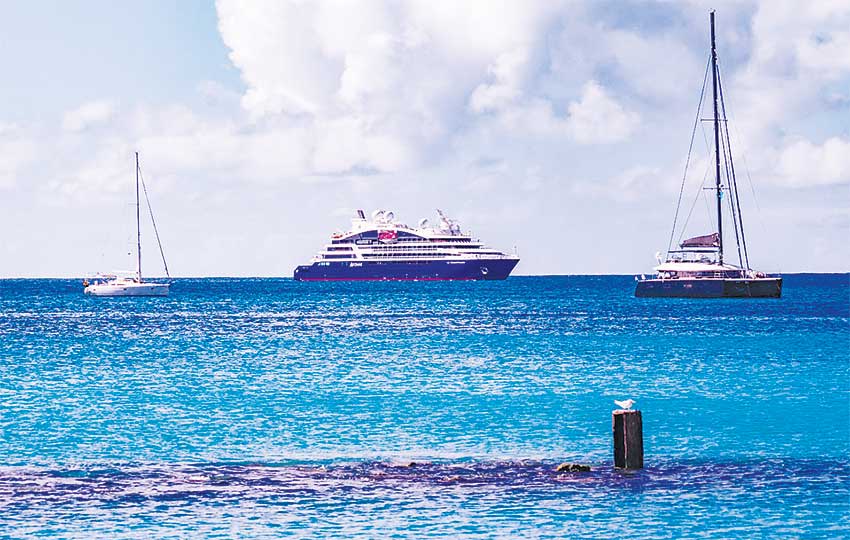 ATTESTING that this country is seeing a ‘bustling ‘ 2018/2019 cruise season, the Saint Lucia Tourism Authority (SLTA) has announced that the Island is projected to realize increased numbers of cruise passengers compared to the record setting 2017/2018 figures.

The SLTA said it is ‘ecstatic’ about increased cruise calls to Port Castries over the holiday season.

It noted that from mid-December, the Castries harbour has been abuzz welcoming up to five ships per day.

According to the SLTA, on Wednes day January 2, 2019, Le Champlain made its maiden voyage to Saint Lucia.

The vessel is the second ship of the Ponant Explorers-class of cruise ships operated by Ponant, the Authority said in a release.

Le Champlain docked in Soufriere where passengers were greeted with the warm morning sun and the view of the UNESCO World Heritage Site – the Pitons, according to the release.

The vessel sailed up the west coast of the island to dock in Rodney Bay about 3:00 p.m., giving passengers a comprehensive view of the island’s northern tourism hub.

Le Champlain departed its home port in Fort-de-France, Martinique on December 28, 2018 with calls to Grenada and the Grenadine Islands, Saint Lucia, and Guadeloupe, and culminated its voyage on January 4, 2019 in Fort-de-France.

The vessel named after Samuel de Champlain, “The Father of New France” offers a refined small ship cruising experience, with a maximum capacity of 184 passengers.

The visit by Le Champlain is part of the bustling 2018/2019 cruise season where Saint Lucia is projected to realize increased numbers of cruise passengers compared to the record setting 2017/2018 figures.

The vessel is slated to make additional calls into Saint Lucia during its 2019/2020 cruise schedule.

The destination also welcomed inaugural calls of MSC Preziosa, Zuiderdam, Norwegian Jade and Norwegian Escape in 2018 and is looking forward a to bustling cruise season in 2019. (SLTA)