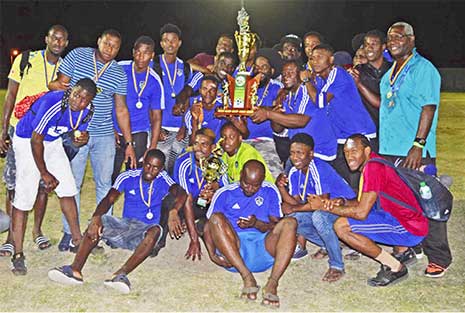 THE Confederation of North, Central America and Caribbean Association Football (CONCACAF) announced that Curacao will host the 2019 CONCACAF Caribbean Club Shield. The competition for amateur Caribbean clubs is scheduled to take place April 5-15, 2019 at the Ergilio Hato Stadium and Dr. Antoine Maduro Stadium, in Willemstad, Curacao.

The tournament, which was announced last year and is part of the expanded CONCACAF Club Competition Platform, will feature the participation of clubs from 13 different Caribbean Associations, all of whom are working with CONCACAF towards a long-term vision to professionalize the club game across the region.

“We are thrilled to celebrate the second edition of the CONCACAF Caribbean Club Shield, a tournament which plays a crucial role in the continued growth of our expanded Club Competition Platform,” said CONCACAF General Secretary Philippe Moggio. “This tournament, along with the Flow CONCACAF Caribbean Club Championship embodies the best of club football in this region and provides Caribbean Associations a direct pathway to the Confederation’s top regional club championships.”

The participating clubs for the 2019 CONCACAF Caribbean Club Shield are (in alphabetical order by Association):

In the inaugural edition of the CONCACAF Caribbean Club Shield, Club Franciscain of Martinique was crowned champion with a 2-1 victory over Suriname’s Inter Moengotapoe. The Martinique club continued its outstanding 2018 international season by edging Trinidad and Tobago’s Central FC 2-1 in the playoff to secure a spot in its first-ever Scotiabank CONCACAF League, where it eventually fell to Nicaraguan side Walter Ferretti in penalties.

Competition Format: The 13 participating clubs are sorted into four groups for the Group Stage. After round-robin play, each group winners and runner-up will advance to the quarterfinals. The quarterfinal winners will automatically qualify to the semifinals, and the victorious teams from the semis will participate in the championship final.

In their first game of the tournament, Saint Lucia, Platinum FC will play Ram Village Superstars on Friday 5th April; then Hoppers FC on Sunday 7th.