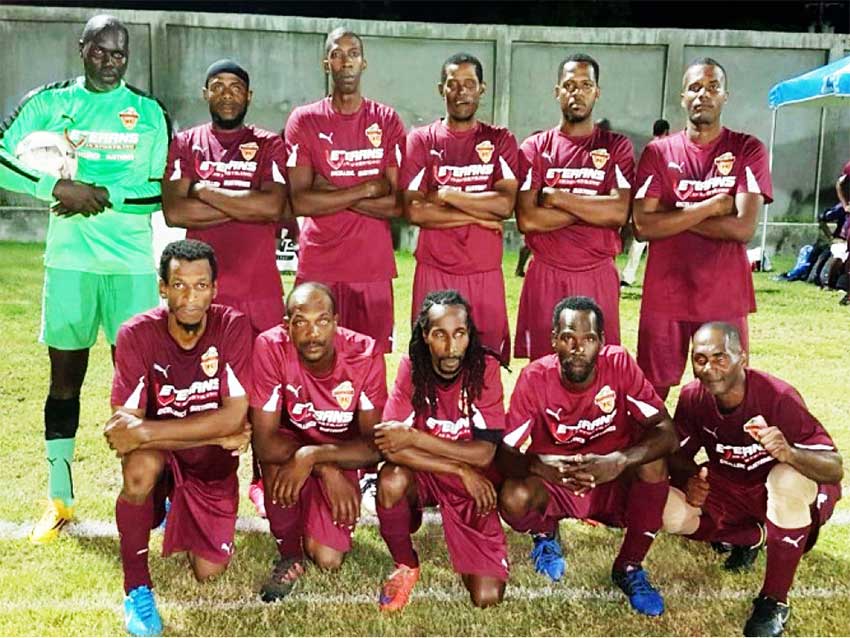 THE preliminary round in the 2018-2019 Veterans in Sports Inc Football Tournament has been completed following the final round of matches played at the Philip Marcellin Grounds in Vieux Fort.

Going into the festive season, the tournament takes a break and according to the organizers, the excitement and friendly rivalry resumes on Saturday 12th and Sunday 13th January with a highly anticipated quarterfinal of the FLOW Plate Championship scheduled for the La Ressource playing field in Mabouya Valley.

For the Flow Plate championship, Choiseul Veterans comes up against Prophets and Kings, Anse la Raye Veterans versus Vieux Fort North, Laborie Veterans will play their neighbours Vieux Fort South and Valley Legends will fancy their chances against All Blacks – Dennery.

The following weekend (January 19th – 20th) the action will return to the La Ressource playing field where the top teams will battle it out in the quarterfinal round for the Caribbean Alliance Gold Cup.

Defending champions of the Caribbean Alliance Trophy, Soufriere, led the charge in Group A with 10 points and a +10 goal difference. On their way to the quarterfinal round they defeated former Caribbean Alliance champions and current Plate Champions VSADC 2-1, Choiseul 6-2, Mon Repos Sharks 5-0, and drew 1-1 with Anse la Raye Veterans.

VSADC is the second team going through to the main knockout round.

Gros Islet topped Group B, winning all four of their group matches and ending with 12 points, and a +15 goal difference. They are yet to concede a goal, having beaten CARICOM Masters 3-0, Vieux Fort North 7-0, Micoud Veterans 4-0, and Prophets and Kings 1-0.

Micoud Veterans were second in that group with 7 points, and will join Gros Islet in the Caribbean Alliance Trophy knockout competition in January 2019.

Central Vieux Fort takes charge of Group C with 10 points and a goal difference of +17.

CVF played to a goalless draw against Labowee Connexions; hammered Laborie Veterans 5-0; trounced Dennery All Blacks 8-1 and made light work of Canaries Veterans when they defeated them 6-1.

Group D, Flow Lancers FC, picked up two wins on the trout; they defeated Vieux Fort South 1-0 and Congorians 3-0. They were pegged back by Marchand with a 1-1 draw and Valley Legends 2-2, to finish at the top of the group with 8 points and a +4 goal difference. Marchand finished second in the Group.

CEO of VISI Alvin Malaykhan spoke to the VOICE. “The tournament has really lived up to expectations, this year the level of competition has improved tremendously. No clear favourites.” He noted.

Malaykhan said, “You have teams like Soufriere and Gros Islet looking really impressive, Vieux Fort Central worth their host of All Stars right there on their heels. There were a few major disappointments one being Caricom Masters, former champions, not even making it to the Plate; next year they will have to qualify to make the tournament.”

He continued, “So from an exciting preliminary stage to a highly anticipated knockout stage, great football ahead in January and February; Mabouya, look out VISI kicking it all off with you.”