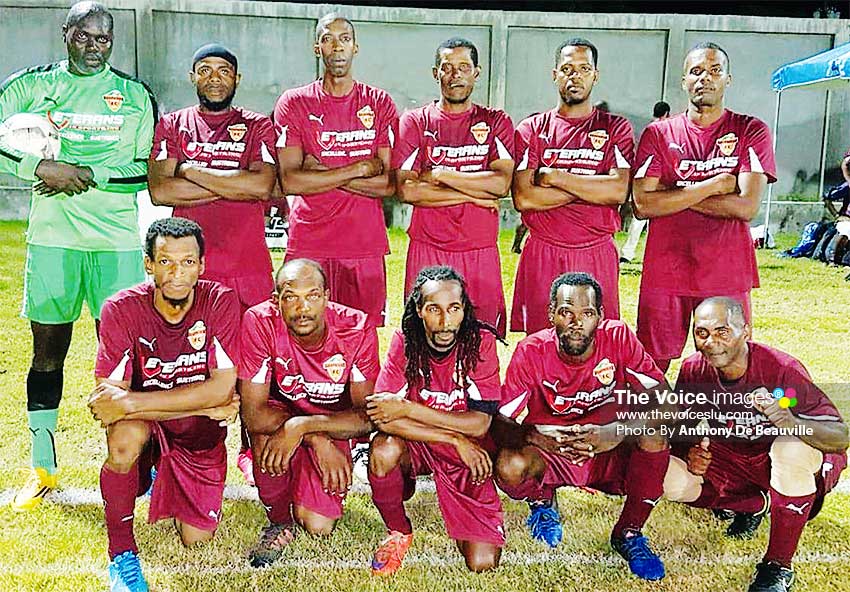 Veterans In Sports Inc organizers of the 2018-2019 Veterans Football Tournament will return to the Phillip Marcellin Ground in Vieux Fort tomorrow evening (Wednesday 12th) with the final round of preliminary matches.

The two games on the evening card are expected to be keenly contested. At 6.00 p.m. in game one, an all Laborie derby for bragging rights; Laborie Veterans on 6 points and Labowee Connexions on 5 points will play each other.

At 8.00 p.m in the final game to bring the curtains down for the festive season, Vieux Fort Central will play All Blacks – Dennery.

Meanwhile, the Phillip Marcellin Grounds in Vieux Fort, on Saturday 8th December  came alive as defending champions Soufriere Veterans maintained their position at the top of Group A with a hard fought 1 – 1 draw against Anse La Raye.

At the end of the first half, the scores were locked at 0-0 despite several scoring opportunities on either end of the pitch.

On the resumption, both teams upped the tempo just a notch, but it was Anse la Raye which looked the more attacking team and despite their urgency the defending champions opened the scoring with a goal from their prolific striker Jerome Serville in the 65th minute..

With quite a bit of time left in the game, Anse la Raye never for once allowed their shoulders to drop as they continued to press on for the equalizer in the first instance and then to see whether they could  come out on top as winners; they were finally rewarded with a goal in the 80th minute from the boots of Telesford Samuel to make it 1-1.

Anse La Raye having being re-energized by Samuel’s goal at that point was firing on all cylinders, but unfortunately their hopes were dashed as they now had to settle for a quarter final spot in the Flow Plate Tournament.

In the second game Vieux Fort South made light work of bottom of the points table in Group C, Congorians defeating them 3 – 0.  The goal scorers for VFS were Ernie Soudatt in the 34th minute, Stephen Maxwell in the 36th and Marcus Kangal in the 78th minute.

On Sunday 9th,  a total of 17 goals were scored including a 6 – 1 drubbing  of Canaries by Vieux Fort Central and in the process a hat trick scored by Leton Sandiford, the third in this year’s tournament.

The deadlock was finally broken as Prophets and Kings No. 5 Darron Wiggins scored in the 48th minute; PAK quickly doubled their lead in the 50th minute through their No. 7 Emmerson Myers.

With mother nature at its best, the scotching heat was a talk of the afternoon.  With some fresh legs in Vieux Fort North they pulled one back in the 61st as Dwane Edward’s right foot shot eluded the PAK custodian. VFN continued to add the pressure and at that point, the afternoon’s heat certainly had the better of PAK as their energy level had dropped significantly to allow VFN to capitalize by two quick strikes, the first from Edmund Jn Charles via the penalty spot in the 80th minute and Richardson O’Brien in the 81st minute, a beauty of a goal, sealing the victory for VFN.

In the second game, last year’s finalist Gros Islet Veterans made light work of Micoud Veterans defeating them 4 – 0 to take charge of Group B with 12 points.

For Gros Islet the goal scorers were Randy Regis in the 32nd minute, Miron Joseph in the 54th minute, Everton Regis in the 77th minute and Troy Serieux in the 83rd minute.

In the evening’s final encounter, home team, Vieux Fort Central trounced Canaries 6 – 1 to maintain their winning ways and in the process went on to top Group C with 9 points and one game remaining in the preliminary round.

For VFC, the goal scorers were Leton Sandiford, a hat trick in the 4th, 14th and 60th minutes, Valencious Joseph in the 36th minute, Andy Jn Baptiste in the 63rd minute and J. Jones in the 83rd minute.

Canaries’ lone goal was scored by Shaun St. Omer in the 89th minute.