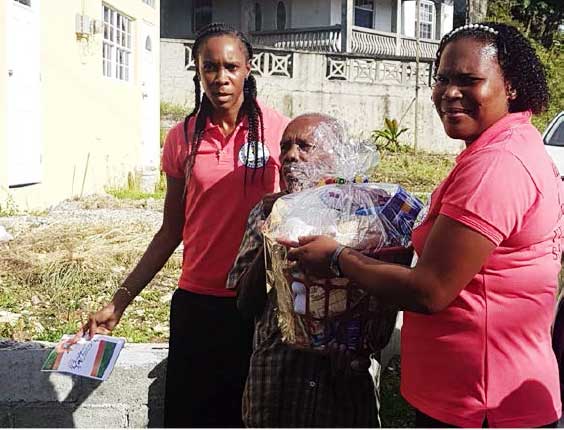 POVERTY doesn’t discriminate. It hits everybody in all corners — and Christmas is such a special time that a little goes a long way. In other words, that’s exactly What the Doctor Ordered this past Sunday 23rd December 2018, as three-times Olympian Levern Spencer and her team, headed by her local manager Gregory Dickson, presented several hampers to those in need.

The house to house sharing started at 2.30 p.m. and went past 6.00 p.m. in the Cocoa and Fond Asson area, as the newly formed group (FOCUS) – Fulfilling Our Calling Under The Sun certainly brought glad tidings to the hearts and smiles on the faces of the various recipients; in fact at a certain home it was so touching that one of the recipient shared tears and when asked which was her favourite Christmas song of yesteryear, her reply was – All!!!

Most of the individuals who received hampers are senior citizens/needy persons from the community, some of whom live alone; three young boys also received special gifts from Levern as it was their special request, one being a student of the Dunnottar School.

In 2019 the group intends to visit quite a few places of interest that they think they can contribute to.

The sweet songs sung by the group who are also members of Gospel Baptiste Church of Cocao, Babonneau where Levern worships were – Away in a manger, Beautiful Jesus, Angels we have heard on high, Silent Night, The First Noel, O come All Ye Faithful, We wish you a Merry Christmas and the list goes on.

Speaking to the VOICE on this special occasion was leader for the group FOCUS, Gregory Dickson, he said, “The Group Focus was formed out of the need for us to be more active in our community particularly as Christians; sometimes we do more talking than acting; we thought it was necessary for us to put into action the things we talk about all the time. It’s the festive season and lots of persons in the Babonneau community may not be having the best of Christmas season because their situation is not the best.”

Before Sunday’s delivery the group identified a few persons they believed were deserving of those hampers and they intend to make life better for various recipients.

According to Dickson, the group was recently formed, “we have been together as friends and family for a long time, we just saw the need to formalize ourselves into a group, it does not end here, it is something we will be continuing into the New Year and beyond; we won’t be waiting for Christmas 2019 to repeat; as we see the need and as the need arises in the community we will go around and reach out to people not just with hampers but in any other way we think we can assist as a group.”

With the high cost of schools supplies, the group will be hoping to make this bigger and better, Dickson said, “We will be going beyond just the needy persons, we have already began talks with a few potential sponsors, people who are really impressed with what we are trying to do and they have agreed to coming onboard to assist, so we will be looking at the schools as well.”

Three times Olympian and multiple sportswoman of the year Levern Spencer said, “This is our first hamper distribution, Fulfilling Our Calling Under The Sun, its fortunate we are starting in December, during the Christmas Season; our main goal and purpose is not just around the Christmas Season but throughout the year 2019 and beyond as we will be recognizing /helping out people who are less fortunate.”

“It’s a passion of mine, I love serving others, I love helping people and this is pretty much what I went to school for and study, health promotion. I chose that major, I am happy to be part of this group to embark on this journey.”