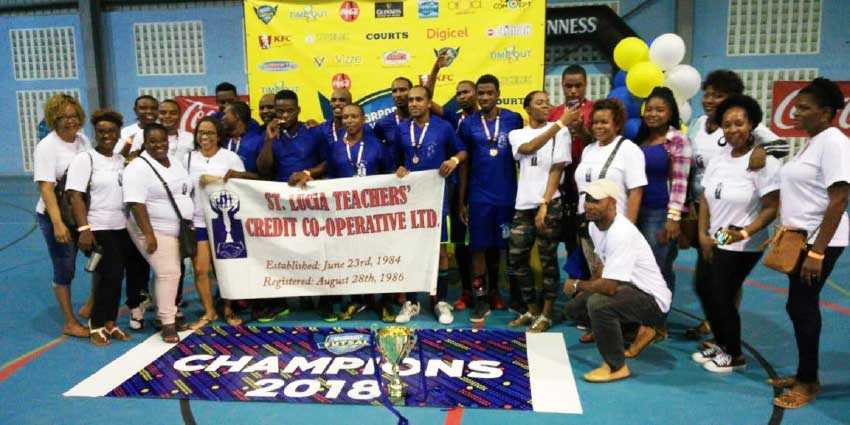 THE Beausejour Indoor Practice Facility (BIPF) was a blaze with entertainment, scintillating futsal on centre court and lots of fun in the stands as Timeout Entertainment organizers of the Corporate Warfare Futsal tournament staged the grand finale this past weekend (Saturday 8th December) in front of an appreciative crowd of supporters.

On centre court it was the first appearance in a final for the Saint Lucia Teachers’ Credit Co-Operative, when they came up against Ministry of Infrastructure, another first time finalist. As the two teams made their way on centre court the atmosphere inside the BIPF was electrifying.

Under the watchful eyes of Referee Leo Clarke, Kamali Charlemagne put the Ministry of Infrastructure ahead in the 11th minute of play, but three minutes before the halftime whistle, Nehemiah Wilfred got the much deserved equalizer for Saint Lucia Teachers Credit Co-Operative to end the half at 1-1; so it was game on from here.

On resumption after the break, the Saint Lucia Teachers’ Credit Co-Operative went ahead with a goal by Jacob Dupre in the 22nd minute to start a celebration both on centre court and with their supporters in the stand in a party type atmosphere; the celebration was short lived as the Ministry of Infrastructure, with their supporters behind them, upped the tempo a notch and in the process equalized with a goal from the boots of Petrus Gustave in the 29th minute.

However, in the 45th minute Kirby Felix sealed the deal with the winner, thus giving the Saint Lucia Teachers Credit Co-Operative their first ever CWF Championship Trophy.

For the third place trophy, Sandals La Toc took on Small Business Owners (SBO) playing with what can best describe in football terms as a thin bench (five players) versus Small Business Owners. All eyes were glued on centre court as both teams produced some exciting offensive and defensive football; in fact both custodians came up with some spectacular saves as they were tested relentlessly between the uprights.

At the final whistle Sandals La Toc emerged winner with a 7-6 scoreline; the half time score 2-1 in favour of Sandals La Toc as the pendulum shifted from one side to the next. The scores were level at 3-3, 4-4, and 5-5, but Sandals La Toc nosed ahead at 6-5, and they went on to double their advantage at 7-5. Sandals La Toc win was due to a hatrick scored by Melvin Aurelien in the 5th, 30th and 37th minutes; the tournament leading goal scorer Ferguson St.Clair was again on target with goals in the 22nd and 32nd minutes and Ravi Wilfred in the 3rd and 33nd minutes.

Small Business Owners were not far behind as Sylvanus Mann also scored a hat trick in the 17th, 28th and 29th minutes, Elias Maxius in the 23rd and 33rd minutes and Robert Emanus in the 38th minute.