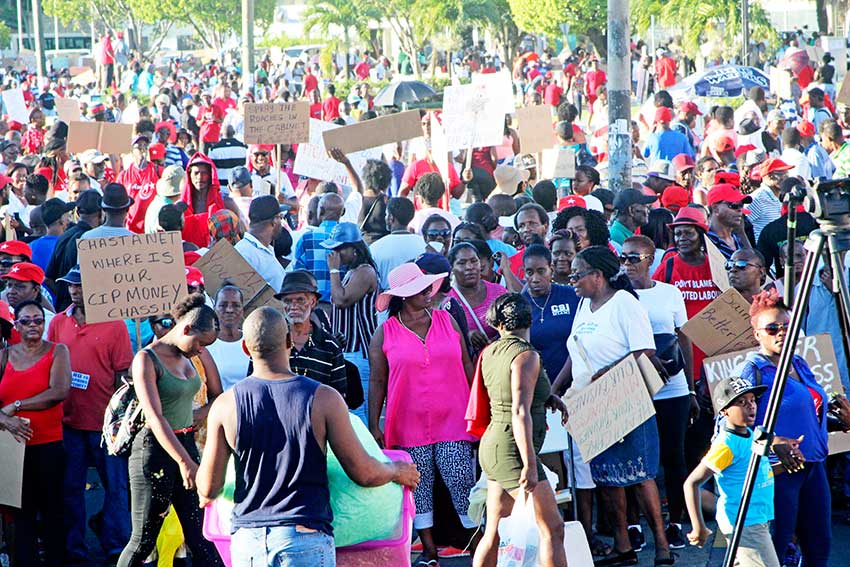 THE EDITOR:
Am I reading this correctly? Is there a plan by the St Lucia Labour Party to get back into power against the will of the people of St Lucia?

I note that in its protest march last Sunday there were calls for the removal of the current government and the holding of new elections. Now that may simply be a lot of the traditional SLP rhetoric but is such a move really being contemplated? I ask the question against the background of some very disturbing events in the SLP arena since the election of June 2016.

It is clear to everyone that this utterly shameless SLP never accepted its defeat at the hands of Allen Chastanet whom it had berated so much as being useless and incompetent. They even claimed that he was an imbecile, but we now see and hear Allen Chastanet speaking and he is more articulate than the SLP leader. How come? They have called Chastanet all kinds of names: arrogant, vindictive, clueless etc. No one, however, has called him names that have been attributed to persons on the other side.

So having lost the election —and Labour quite deservedly lost it—they have been on the rampage ever since refusing to accept their defeat. They have done such a fantastic job of harassing the duly elected government that they have enlisted, wittingly or unwittingly, the services of some of the usual suspects and some very new actors in their cause to bring the government down: the CSA, the Teachers Union, The National Trust, the Concerned Citizens Group of Vieux Fort, the NYC, Raise Your Voice, The Medical and Dental Association etc. Now some of these organizations may forcefully declare that they are not involved in any such plan to oust the government that the people of St Lucia elected in free and fair elections, but their recent activities may also belie any such claim.

For starters, why were these organizations not as vocal during the five years that the Labour Party last ruled our country (2011 to 2016) when everything collapsed under them and they proved incapable of creating any kind of positive climate in the country? Was the leasing of the country’s seabed to an American tycoon not worth standing up against? We talk about selling our patrimony, was this seabed not our patrimony? Why is it that none of these groups stood up to the Labour Party and demanded accountability in the Grynberg matter?

How can you claim to be interested in the health of the people of St Lucia and the Labour Party stayed five years in power and could not deliver St Jude Hospital and the OKEU Hospital and you stood by and said nothing? Not even in their fifth and final year, did we hear you complain. Why?

How can you claim to be interested in Vieux Fort when your party leader was the Prime Minister and M.P. for Vieux Fort during the time when the town “died”, when crime and violence of unprecedented proportions surfaced and economic activity dwindled and yet you stood by and said nothing about it?

Imagine schools have just reopened and the government had to spend $10 million repairing buildings. This deterioration did not happen overnight. Why didn’t you who represent teachers raise your voice in protest?

On two occasions, the Labour Party that you love so much froze your salaries for three years, yet you did nothing. They brought in their henchmen into the Civil Service and appointed them to positions and with salaries greater than that enjoyed by your members and you did nothing. Now you have mouth to protest and demand big increases. Did you protest when they gave themselves increases of close to 80 percent? To Stephenson King’s credit he called your collective bluff and gave you 14.5 percent. When was the last time you got such an increase?

The government of the day has no dispute with you but you go on a sick out because you find they should be talking to you about their plans. How ridiculous can we get? We also have Monrose talking nonsense about governance when he said nothing about Juffali or Grynberg, or Lambirds.

Where was the NYC to advocate for the young people of St Lucia at a time when youth unemployment was at its highest? Did we hear them putting some hell on Kenny Anthony’s government?

We now championing historical buildings? Well, was not the old prisons deemed an eyesore? Why should it remain standing even after the prisons has been moved to Bordelais more than 10 years ago? Of what historical relevance are the old prisons, really? Or the government printery or parliament buildings for that matter? Did we not break down the old power station on Jeremie Street? Did we not break down some of the CDC apartments built after the Castries fire? Did we not rebuild the entire commercial sector on the Boulevard and Bridge Street to erect better and stronger buildings?

It is mind boggling that at a time when the government is seeking to create economic activity and employment for people while at the same time rebuilding the capital city more aesthetically there are people spouting foolishness all over the place about history. If it were up to these folks the ghetto in the Conway would still be there today. So would the swamp at Gros Islet where a new city, Rodney Bay, with commercial, industrial and residential investments now dominate.

So we do not want a Dolphin Park, we do not want the DSH project in Vieux Fort, we do not want the redevelopment and modernisation of Castries. We want the old parliament buildings and the old Court building with their mould and termites to remain standing after nearly 70 years because of their historical significance? How pathetic. How visionless of the St Lucia Labour Party and its followers.

But the United Workers Party needs to get out of its slumber and mount an offensive against this naked attempt by the Labour Party to grab power. They had the support of 37,172 people in the last elections. If there was this great outpouring of protest against the government and given the Labour Party’s well known ability to mobilize its supporters for protest, there would have been at least half of that 37,172 people at last Sunday’s march. There was not. The failed former party leader in office was always going on about democracy, yet today we find him in the heat of an attempt to subvert the democratic process. He is indeed a main component part of this shameless Labour Party that had nothing to show for its last five years in power but now has the gall to want to campaign for a return. The Labour Party must understand that a few thousand of their supporters aided by the usual anti-UWP suspects like Azzi and Prudent does not constitute “the people of St Lucia”. (By Claude Brathwaite)