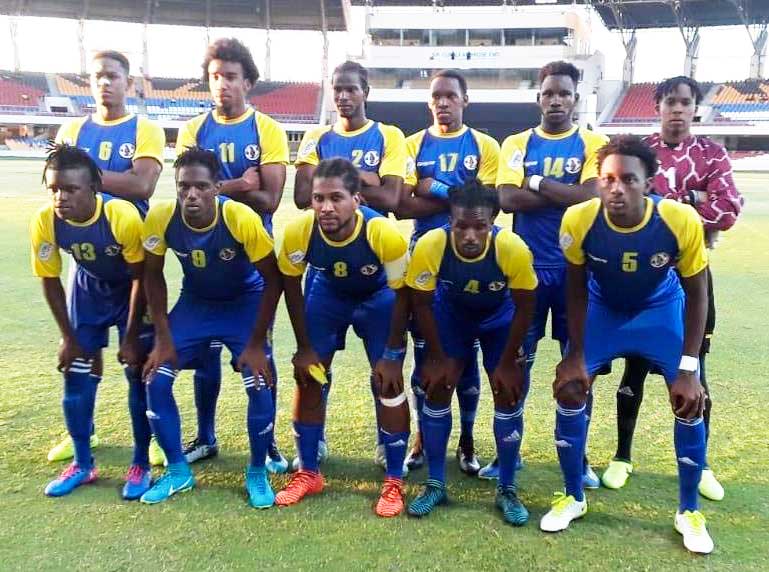 TEAM Saint Lucia kicked-off their CONCACAF Nations Cup campaign with a convincing 3-0 win over host Antigua and Barbuda at the Sir Vivian Richard Cricket Stadium on Friday evening, in an overall team effort.

The first 45 minutes of play belonged to Saint Lucia despite the Antiguans hitting the wood work and the boys in blue likewise failed to capitalize on their opportunities. At the end of the first half the scoreline was all even 0-0.

On the resumption, Team 758 left no stone unturned as they took the game to the home team, their relentless pressure paid off when Pernal Williams found the back of the nets in the 50th.

With 40 minutes of football still to play, the Saint Lucia team went into a defensive and counter attacking play which eventually saw a brilliant header from Andrus Remy in the 67th minute after a short corner was taken making the scoreline 2-0 in favour of the men in Yellow, Black, White and Blue attire.

Malik St. Prix was substituted for Jevick Mac Farlane which added some pace and urgency as team Saint Lucia was in a counter attacking mood.

Saint Lucia made it 3-0 on the stroke of regulation time when the Antiguan custodian apparently underestimated the pace of Andrus Remy from outside the left side of the 18 yard box which gave Remy enough time to get a cross into the 18 yard box only to find Jevick Mac Farlane who struck home goal number 3 which commence a celebration.

The VOICE spoke to Head Coach, Francis Mc Donald about the approach and outcome of the match and this is what he had to say. “The game versus Antigua and Barbuda was well planned, we executed on it. First getting a feeling of the past encounter in 2016 World Cup qualifying round, we had a number of mistakes that Antigua and Barbuda capitalized upon”.

He said, “I paid attention to a number of key elements as to, their style of play; their players coming back to play this game; players back ground checks; their system set up as to what system they are playing; have they changed formation; have they changed coach; their defensive structure; their strength and weaknesses and their key players”.

“Making all these assessments on Antigua and planning for them knowing they would press high and hard to get us clumsy and shaken they didn’t succeed. We were patient and waiting for the right time to execute”. McDonald said.

“The first half ended and we made the changes; we changed our approach and strategies to start pressing harder at them, limiting the space and time on the ball. That worked well for us. As long as we planned for the first goal, we immediately planned for the second knowing the goalkeeper for Antigua and Barbuda was off his game”.

Mc Donald said, “When they pressed for the equalizer, I knew they would send their wingbacks high up the pitch leaving the back open for our counter attack with Andruis Remy to run at them. The plan worked out to our advantage”.

“We got the second and the third in the dying moments of the encounter to the delight of the entire team”.

“Antigua and Barbuda didn’t know what hit them. We planned and were well organized in all departments. The whole team including the changes I made in the second half was well planned as to when to use them”.

Saint Lucia’s next game will be against Haiti on Saturday 13th October at the Daren Sammy Cricket Ground.

In terms of rallying behind the team, Mc Donald made a special appeal to all Saint Lucians, to have hope and faith in the team. The team is very determined and he expects the nation to support them all the way. “Come out in your numbers to the Daren Sammy Cricket Ground to support team Saint Lucia”. He noted.